I have 2 matching marS emergency backpack chutes. These are simular to Softie, Strong, National etc. They are manufactured in CZ. Date of mfg is 1994 and last repack was 2010. Good deal for someone needing a couple of low cost parachutes. Blue with red and black accents. $500 each or $950 for both.
[email protected]

What are their weight rating?

Usually "cheap", "parachute" and "for sale" are not a good combination. I'd expect to also hear, "only used once" and, "small stain on container"
P

So looking up mars parachutes via Google, I see that they make a PZS-92 that the manual represents is TSO-ed per C-23d. Very cool. I will have to add that manual to my collection.

The original poster might want to delete the word "cheap" from the title...

They are rated to 254 lbs like strong chutes. These are popular in some places. I had some about a year ago and put them on eBay. They sold right away. Here is what they look like. 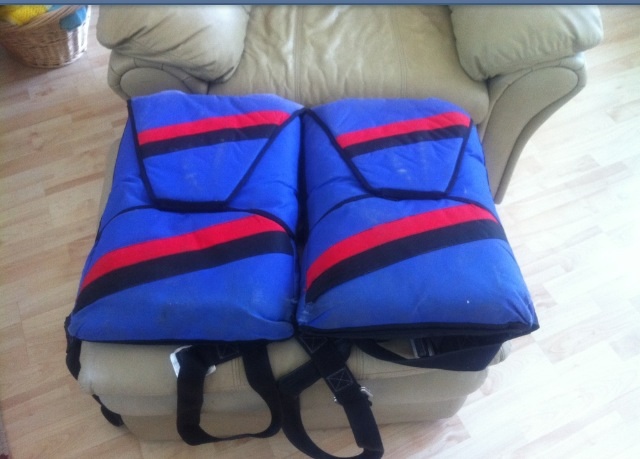 But...that may not be this 90's DOM model... maybe Pigpen' should post the model#, or confirm TSO's on both canopy and harness....

If this is a PZS-92, the manufacturers manual states a 15 year life limit.
I guess this means they need new canopies and lines?

Kinda like softie states 20 years. Here is something to read. Came from Pennsylvania parachutes site.

There is an urban legend out there that states that a parachute has a service life of 20 years. THERE IS NO BASIS IN FACT FOR THIS. A parachute system&#8217;s airworthiness is affected by abuse caused by the owner and number of jumps on the unit. Parachutes can typically handle hundreds of jumps .

Recently, the United States Parachute Association requested clarification on this matter from the FAA.
On August 21, 2012 the FAA replied. The FAA stated that any parachute certified under standards TSO- C23b, TSO C-23c and TSO C-23d did not have a maximum service life. Continued service life of any given parachute unit is to be established by a certificated parachute rigger at the time of inspection and repack of the parachute. No pilot emergency parachutes currently available, have a maximum service life under these criteria.

If a parachute manufacture wants to establish a maximum service life after receiving their TSO under the above series of TSO&#8217;s they must submit their request with corresponding supporting data to the FAA for review and request that an Airworthiness Directive be issued by the FAA for that model. This has not happened. A simple recommendation of service life added by the manufacturer to their manual after their TSO has been issued has been deemed by the FAA as a non-regulatory requirement. Continued service life for any given parachute assembly then, is to be determined by the certificated parachute rigger upon inspection of the parachute in question.

If a service life is to be assigned to a model parachute it has to be included as part of the initial TSO process for that model with corresponding data to support that request unless a subsequent AD is issued.

Any parachute rigger that simply refuses to recertify your parachute simply because of its age is doing you a disservice.

Interesting. I would have thought that a manufacturers service life limitation would be binding.

edit: In an effort to make this clear for everyone, I googled and found the letter and have attached it in PDF format. I have also copied the text herein.

[FONT=Verdana,Arial,Helvetica][FONT=Verdana,Arial,Helvetica]Dear Mr. Ottinger:
This letter is in response to your request for clarification regarding parachute manufacturers establishing a service life beyond the requirements of the Technical Standard Order (TSO) which the parachute was built (TSO-C23b, dated March 29 1962). Members of USPA also maintain that since TSO-C23b, TSO-C23c, and TSO-C23d did not establish a service life, a rigger may extend the life of the system 180 days at a time.

The Federal Aviation Administration (FAA) considers the service life recommended by the manufacturer, a non regulatory requirement for a parachute that meets the standards of TSO-C23b, TSO-C23c, TSO-C23d, and sold before a service life was established.

Thank you for your interest in aviation safety.
Sincerely,

To explain a little more, as stated above, in the US, there has been no official engineering work done to establish a life limit for nylon parachute assemblies. Some manufacturers, perhaps from an abundance of caution, would like you to replace your parachutes after a calendar time. This has no regulatory weight as noted above.

Parachutes are inspected for airworthiness at every repack. If a parachute rigger can not identify a structural problem, he or she may repack and sign it off. If anyone tells you different, that suggests that they are unfamiliar with the type of parachute or they do not want your business for whatever reason. So find another parachute rigger who is more knowledgable.

I have jumped round parachutes that were 25 years old, as a sport main parachute, without problem. The fact that I have almost 100 round jumps sort of suggests my age. But I look at the older parachutes that I repack really really hard, and I have not condemned one yet. And I would jump any parachute I sign out of my shop.

pigpenracing... are these PZS-92 chutes?
Maybe a pic of the tag and/or scan of the last repack cert?

Will get more info tomorrow. I am at work all night and the chutes are at the house.

I've got one that was made in 1952. last repack was 1999. The rigger asked the owner to please not bring it back. There was nothing determinable to be wrong with it, just made him nervous. It was Korean war surplus, heavy and cumbersome.
R

>I would have thought that a manufacturers service life limitation would be binding.


It certainly would be in a court of law. The regs state that we must follow the manufacturers instructions. If the manufacturer states that it has a service life limit (and they all do but one) who am I to countermand that? And besides, it goes way beyond the legal regs. When I pack an emergency chute and put my seal on it, I've resolved any and all possible concerns I may have had. Or, I don't pack it. Can I pack it with a clear conscience when the manufaturer said not too? Call them up and ask them about their service life limit (as I have) and they'll give you very good justification as to why they do what they do.

It's a parachute. A life saving device. When there's a planet coming at you at 120mph and you "arch, reach, and pull" you better have absolute confidence in that thing. Otherwise, you are less likely to choose the option of using it when your world is coming apart and you're running out of options and altitude at the same time. Getting most pilots to accept the notion of "leaving their ship" is difficult enough.

There are enough parachute riggers out there, choose one who's philosophy is most closely aligned with yours and then build a relationship with them. Because, you're in this together.

Well, that resolves everything, then....

A RV guy just flew over form Georgetown airport to pick them up.