ok, so i have "held" this plane and need either an inspection of the the plane or affirmation of the IA who did the partial rebuild in order to pull the trigger.

it will cost $6200 to ferry it to Oregon. unfortunately, i don't have the time to do it myself.

this seems to be a very optimal fit for what i've been looking for. neither the engine or fabric is new, but seemingly good enough. (and the right colors ;-)

who would you have inspect in Beufort, NC? or, is Kevin Snyder a known quantity?

i need to decide and move on this today.

by comparison, there's another S1S on barnstormers for $32k in CA, which I could ferry home myself. knocks against: Ultimate wings.

I think I know the airplane a little bit. It was flown by a friend of mine in Advanced in '77 which means it's two years older than stated. I believe an FAA registry search will confirm this. I don't remember Kermit ever flying this airplane in competition or any other time but it's possible. Kermit had his own S-1S while he was building the Weeks Special.

It was flown by Dana Vilhen in competition, he won the the Intermediate National Championship in '76 in a different airplane. He almost always beat me in Advanced but I got him at the Nationals in '77, I'm remembering he was third that year. Anyway, he was the primary pilot back then and obviously no hack Pitts driver. Just because an airplane was flown in the upper categories doesn't mean it was abused.

What happened with the airplane after '77 I don't know. I'm not sure what Dana did with his life after that but he may have gone into the military to build a career in aviation.

thanks, Bill! it sounds like one can presume that it was quality built, at least? as my wife says about houses, "it has good bones."

know anybody in NC who could take a peek at Kevin's "partial restoration" work and ask the appropriate questions? or know that Kevin is such an upstanding guy that one can trust it at face value?

I can't really comment on the build itself. Curtis' involvement could have been supplying parts or it could have been more. Hard to say. It may have a lot of factory or Homestead parts, I just wasn't aware of the airplane until it was finished so I don't know. The only thing I can say is Dana flew in '77 in Advanced and if this airplane was indeed completed in '77 this is almost certainly that airplane. A lot could have happened since then.

yeah, it's the "since then" that i'm concerned about.

zoom in on the pics and you can see there's corrosion on the ends of the flying wires (e.g., the tail), for example. which may be fine, but perhaps the tip of an iceberg?

You can try and get Eric Minnis to go look at it with Bully Aero out of Burlington,NC but that would be a bit of a hike for him but you can always ask. Or a bit closer is Danny Bond out of Oak Island, NC. Both are awesome Pitts guys. You can google them for their numbers or you can contact me and I will give you their numbers. Eric is on forum as well.

Another Vote for Eric Minnis at Bully Aero his number is (336) 263-8558. Is a pleasure to deal with and will tell you his honest opinion.

The forks being corroded is pretty typical. The plating only lasts so long then you're bead blasting and painting, buying new or getting them re-plated.

It's funny, all the flights together we made from contest to contest and I can't remember the N-number. I do remember the airplane was a little out of rig and Dana would just let it find a happy place which was one wing about 5° low and a little sideways to keep it from turning.

any thoughts re the one in CA with Ultimate-style wings? (not full-on Ultimate, apparently - missing 3rd flying wires)

like like a really nice motor - slightly over compressed, but not scarily. i know there's different opinions RE the Ultimate wing.

I saw Aaron's airplane at Reno several years ago. Looked nice and was fast. He's very personable. You could contact Bobby Graham out of Redlands, CA. He was the tech insp for bipes, he could give you some insight. [email protected] is the only contact I have for him.


Sent from my iPhone using Biplane Forum
A

Hey JDM- I was in China but am back. Sorry I missed your call. Contact me at 336-263-8558 about the airplane. I saw it a few months ago but have not done a complete pre buy.
Thanks-
Eric

FWIW the wings on the airplane in CA are not Ultimate wings. They are modified S1S wings with squared tips and ailerons.

One would like to hear the outcome of this thread. The other question is how in the world could it get to $6200 to ferry the airplane out? That seems awfully high.
T

What happened to this plane? I see it is back on the market.

I might be looking for a S1 soon and was curious about this.

I see this plane is back up for sale on Barnstormers. Looks like it's nearly complete. If I was closer I'd definitely be interested.

I think it looks good for the asking price, however I think his fan belt is on wrong. 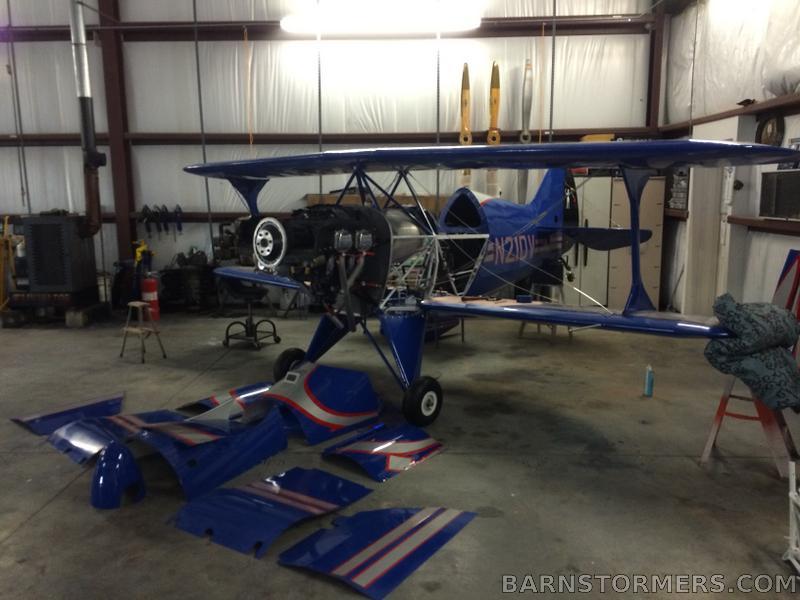 its original cover that has just been repainted, owner told
Me he didn't like red. Says it weighs 780 empty, it hasn't been weighed since the re paint, new panel or light weigh starter and alternator were installed, also has a flange with lightening holes, hasn't been flown in two years. This all info I found out from owner this morning.

According to FAA records, he bought it in Feb 2014, and then had it listed for sale at least as early as Sept 2014 when this thread was started. Did he happen to mention why he put it up for sale after only 6 months of ownership? Did he buy it to flip for a buck, or did something happen?