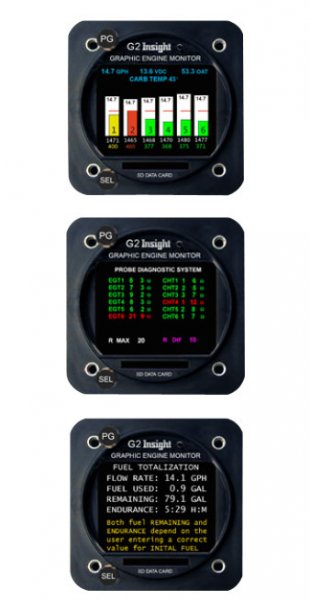 I recently got my Champ back from the shop with the new Insight G2 engine monitor installed. This is a monitor which measures CHT and EGT for each cylinder, as well as fuel flow, voltage, carb throat temperature, and outside air temperature. It includes a fuel totalizer function, and has some clever leaning features that would be more useful if I had an injected engine. It records all this data once per second on an SD card that pops into the front of the instrument, making it very easy to take home to analyze. On top of all this, it fits into a standard 2 1/4" hole, which was a major selling point for me. The G2 will measure as many as 6 cylinders, and will measure TIT for turbo systems. It can't measure oil temperature, pressure, RPM, MAP, etc. I kind of wish it did, but the $1500 price increase to get those functions wasn't worth it to me.

The install process (completed by my A&P, though I got to see their work up close) seemed pretty straightforward. We used spark plug gasket CHT probes, since the C90 doesn't have the CHT sensor wells other engines do. It uses an EI "red cube" fuel flow transducer, which works with the gravity-fed system on the Champ without causing problems. I haven't gotten the install bill yet, but the device itself (including all probes) was about $1900 from ACS, and I expect it took around $2k to install.

In practice, the device is fairly simple to use, at least from a controls standpoint. The top knob flips between different "pages": temperature bargraph display, sensor status, settings menu, and fuel totalization screen (see the image at the top of this post). The bottom knob sets or changes things within the screen. Both knobs have a twist motion, and a push motion. The page you end up using 99% of the time is the bargraph display, which shows the following data pretty clearly:
The numbers are small, about the size of the numbers on the Kollsman window of my altimeter, but I didn't have any trouble reading them in flight. The detents on the rotary knobs are pretty light, and it's easy to flip past pages if you're not paying attention. The detents on my GTR225 radio are much more definite, and I prefer its feel to the Insight's.

I'm still in the phase where I'm spending a lot of time looking at it, tweaking my mixture, and checking the results on the monitor. The GPH feature was the one that most excited me, since I really like knowing how much fuel I'm actually using rather than estimating based on past burn rates and clock time. Having full EGT and CHT numbers has allowed me to confirm what I had previously suspected was happening: my #3 (and, I discovered, #4) cylinders are running leaner and hotter than the #1 and 2 cylinders. Now, I have the tools to ensure I don't heat those cylinder heads up too much, which is a great benefit. What I didn't expect was to discover that my voltage regulator is letting the system voltage hang out at nearly 15V once it warms up. I'm not surprised, it's an old Delo Remy vibrating-relay type that appears to be original 1956 vintage, and almost certainly needs to be cleaned and adjusted, if not straight up replaced.

The thing that's turned out to be an unexpected benefit is the data recording. I knew it was a feature, but I didn't think through how actually useful it would be. The data is recorded in a CSV file that can be read by Excel, or if you're a nerd like me, can be processed using a Python script to generate a graph and statistics. It's so useful that I've started thinking about making my own data recorder for the Charger, which would simulate sensors for the Westach quad gauge I'm planning to put into the cockpit, to preserve something of the 1930s vintage feel I'm going for. That project is still in raw-idea phase, but feels like something I'm likely to pursue. Part of the inspiration for that is thinking about what happens if I get a Scarlett 9 radial engine: the Insight G9 will absolutely have me covered, but at about $7k and so modern looking, it's not very interesting.

The leaning feature is interesting, and worth mentioning. Basically, the gauge is always looking for peak EGT. When it figures it's found a peak, it will display a box atop the EGT bargraph, showing how many degrees rich or lean of peak that cylinder is. If I had an injected engine that would be fantastic, but with my funky mixture distribution, it will really only do that trick for the #3 and 4 cylinders, reducing its usefulness a bit. I've also discovered that running much lean of peak at all results in a very rough feel from the engine, so my plan is to keep my eye more on CHTs, and make sure that way that I'm not running in the danger zone between very rich and 50 rich-of-peak.

The fuel totalization hasn't gotten much of a workout so far, but it does seem to be close to what I'm measuring with the dipstick. Close enough that on longer trips, I'll be confident using it as a cross-check to my normal "hours x 6" fuel consumption math (based on observations, I'm running about 5.5 GPH overall, so 6 is a reasonable safe compromise number). Fuel added can be adjusted on the ground or in the air, and it will keep in mind the fuel you've already used, which is handy if you don't have a routine yet that includes remembering to register added fuel (oops). Adjusting fuel added is as simple as paging over to that screen, pressing the bottom button, and scrolling back and forth on the knob to change the number of gallons added. This adjustment only works in whole gallon numbers, so if you add 10.5 gallons, you get to choose whether to tell the thing 10 or 11. The exception to that is that the instrument knows your "tanks full" amount, and you can't add beyond that number. The gauge doesn't have any sensors to see how full your tanks are, as the instructions clearly point out multiple times, so if you tell it you have full tanks when you're at 1/4, it will confidently tell you you can fly four times longer than you actually can. Intelligent usage required.

Here's the graph I made showing my repositioning flight from Harvey to Paine: 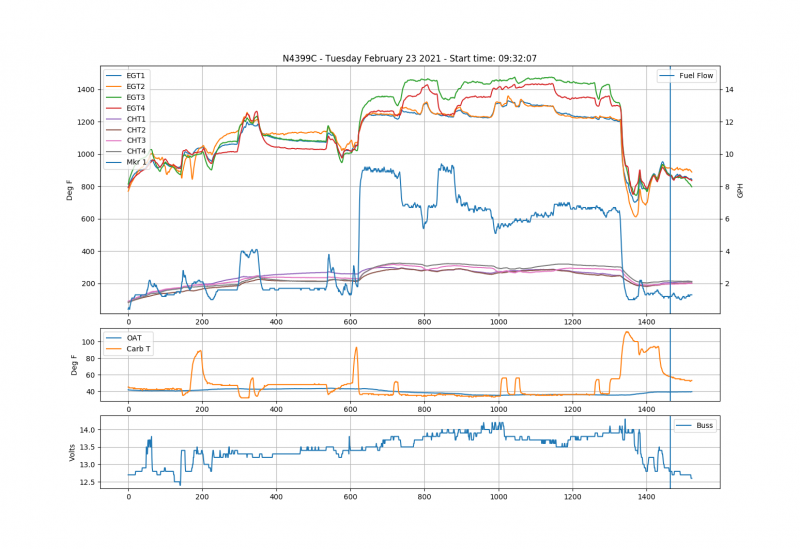 The vertical line at the end of the graph is the "snapshot" feature, basically allowing you to drop a marker in the data for whatever reason you may have. I can easily imagine that being the "here's where I begin today's test" marker if I'm trying out some maneuver and want to see what it does to the engine's stats. To mark a snapshot, you hold the top button in for a few seconds.

One of the downsides of the G2 is that the documentation treats it a bit like the redheaded stepchild. The G3 is clearly the product Insight cares about, so most of the docs talk about the G3/G4 (the G4 being physically larger, and basically a twin G3). Trying to figure out what the G2 can and can't do from the docs isn't always easy. It appeared that the snapshot feature, for instance, was only a G3/G4 feature, and I didn't know it worked until I tried it on a whim.

Overall, I'm pretty happy with it. It's simple to use, it shows useful information, it seems accurate. I have a much more complete picture of my plane's systems now, and it didn't require major surgery or adding a big obnoxious screen to a vintage airplane. I really dig the data recording. That Python script is available to anyone who wants it; once I've got it cleaned up a bit, it'll be going up on GitHub, but ask and I'll pass it along as-is. I'm planning on doing a video review as well, but haven't taken any of that footage yet. I'll post it here if I actually do that.

Ah, the joys of vintage planes