Lycoming 0-320-A2A, 0hrs since overhaul. Bendix mags. PS-5CD Carb. Sensenich 74DM6-0-58 prop. Fuselage sandblasted and epoxy primed along with many other parts. It is a complete project. Asking $8750. Located in Seattle.
[email protected] 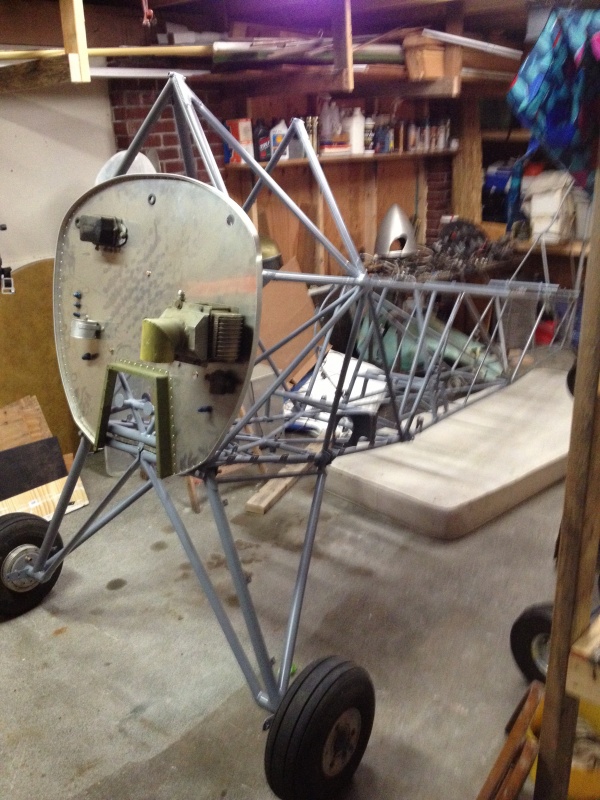 It is all there. It was covered in 1981. The wings and tail are still covered and in silver.
A

Has the airplane ever been flown or is it a first time build? How long ago in calender time was the engine overhauled?

Was this a certified overhaul?
Is it in compliance with the Lycoming mandatory replacement items SB?
New jugs, overhauled, or used?
Cam & Tappets?
Crank?
Crank AD complied with?
A

Here is what I know about the airplane and project. I picked up this project a couple of years ago from a daughter of a gentleman that bought it in 1981. He flew it for a month and taxied into something and had the engine rebuilt and the airplane recovered. The airplane was never put back together and sat in a garage until I picked it up. The logbook shows it was armature built in the 1970&#8217;s and certified for flight in 1973. My intent was to completely restore and put back together. I pulled the cover off of the fuselage and landing gear, sandblasted, inspected, and epoxy primed. Including the controls, brakes and etc.. According to the engine log book it looks like it came out of a spray plane at 744 hours and had a major overhaul. It was then put in the Pitts for another 126 hours then had the prop strike. It was then overhauled at Sky Services in Auburn WA. I do have the work order and sign off in the logbook. Looks like they Cleaned and magnaflux inspected the cam, rods, caps, and gears. Replaced crankshaft (it is a solid crank). Honed the cylinders, installed new rings, bearings and gaskets. They also noted that exhaust valves are 7/16&#8221;. The work order also shows they replaced points in both bendix mags and replaced the impulse coupling in the left mag. I have since pulled all accessories, baffling, starter (prestolite), carb(PS5-CD), generator, exhaust, etc.. Mags and fuel pump look good, I had planned on replacing baffle, ignition wires, carb, starter(w/ lightweight) and alternator. The inside of cylinders are clean and you can still see the honing marks. On the accessory side it still has assembly grease on the gears. I then cleaned, painted and replaced all hoses, seals, gaskets and o-rings. Engine mount was sandblasted, inspected and painted red. The prop is a metal Sensenich 74DM6-0-58 and looks to be in great shape. It also has a new firewall, nose bowl and sheet metal for the cowling. As far as the airframe it is all there but there are things that I would replace. The instrument panel is complete but not sure what is working or not. It did come with a center mounted radio, not sure if it works (old). Has nav lights on wings and tail. Wobble pump looks to be serviceable. I had planned on replacing all fuel lines but they are all here. Brake master cylinders need to be replace and had planned on replacing the wheels and brakes also (drum type on airplane). Sheet metal for aft turtle deck is in good shape but needs to be cleaned and painted. Needs new bungees. Fuel tank looks good. Has wheel pants and all faring's for wing struts and fuselage. The wings appear to be in good shape but I had also planned on pulling the fabric. I believe they have aluminum leading edges. The flying wires are all there and look to be in good shape.
W

ladys and gentlemen, this is what a real deal looks like!
Wally

I agree with Wally, glad it is a loooonng ways away so as to not tempt me more than it already does!
C

I'm so glad to broke, otherwise I'd have another project! Sweet Deal!

I think Grum.man is checking into this one.

wally said:
ladys and gentlemen, this is what a real deal looks like! Wally
Click to expand...

Such a deal and only 60 miles away. Oh to be young again.

Looks like a heck of a jump start for very little money. Oil cooler installation has me scratching my head though.

Man, I want this bad!

Great jumpstart for somebody.

Neil said:
Looks like a heck of a jump start for very little money. Oil cooler installation has me scratching my head though.
Click to expand...

I just read this thread and was about to say this same thing.....

castleman said:
I think 7/16 valves are a minus?

The 7/16 valves were in service for a lot of years. With the newer lubricant additives like Cam Guard they just might hold up as good as any. Up grading to the 1/2" valves at some point probably wouldn't break the bank.

Still think it's a great deal.

If I wasn't in the middle of my project(and my wife forgot my promise from 1978 not to have another single place airplane), I'd consider it as a great deal.

I'm with Neil on oil cooler. Had something similar on my SA300 w/IO360 200hp and I had to move it to left front cowl as per my S1C. Depends on how tight the install and where the cold air is coming from?

If I was younger..

If I didn't have two airplanes already....

Biggest for me is if it was closer. Indeed I might try to figure a way to fund it, hide it in the corners of the hangar, wait until I'm done with current project, thin the herd and start again.......But operative "if" is I'm afraid:

I'm interested in this project, please give me a call.