for my aerobatic aircraft, with an IO 540 C4B5
thanks
Check
Alexandria VA

I have a spare that I do not need. It is new in the box. I'll take half of what current prices are. Let me know and I can drop it in the mail.

yeah uh me too
A

Part number I have is SS-1001 for slick mags. I also have some new and like new slick maga for that motor if needed.
C

Hi Eric, thanks for quik response - maybe you know more of mags than I but looking at AC Spruce catalogue, it's only source on this booster that says:SlickSTART&#8482; is also approved for use with Slick impulse coupled magnetos to enhance engine starting performance. SlickSTART&#8482; is not approved for installation on any airframe equipped with TCM/Bendix 20, 200, D-1200*, D-2000*, or D-3000* series impulse coupled or retard breaker magnetos. I've got Bendix S6LSC-204 and S6LSC-200. But then ALL other sources say th SS1002 is for Bendix mags. So if you've got the SS1002 - then consider it sold to me!. pls confirm that you have the SS1002 for Bendix Mags. thanks and look forward to talking with you check
C

MJK51 - i too saw the difference in applications of the Slick Start - SS1001 for Slick Mags, and SS1002 for Bendix mags. if you too have Bendix mags, how do you plan to use the SS1001 that Eric's offering? i saw service bulletin out by Champion saying NOT to use the SS1001 with Bendix. thanks! Check
A

I double checked my Slick Start and it is indeed the SS-1001 for the Slick mags.

I have always wanted to, but never have had the time to figure out where to find a diagram of the internal difference between SS1001 (for Slick) and SS1002 (for Bendix).

I really don't like on some set ups where the unit getting its power directly from the power lug on the starter solenoid for fear of when the starter solenoid is de-energized, a fault possibly could let a mag ground back through the starter. I would rather have the starter circuitry energize a separate solenoid just for the exciter. (there are a bunch of different wiring diagrams for setup)

We have beat the new electronic mags to death (I really like the Pmag, or the GAMI PRISM spark management system that continuously monitors cyl combustion pressures to retard and safeguards against detonation) but the Gami is not out yeeeeeeeettttttt..... and the other electronic ignitions seem in my perspective only help in the aerobatic panes in starting, and mid range and idle smoothness and nothing for top end if we are really just piddling around in aerobatics around the field, and use another airplane to go somewhere that might benefit more.

So for me it seems (only an opinion) Slick will work fine for the starting aspect, and works to quell the fear of impulse junk coming apart in the engine. Although I have never seen that happen we have heard of it.

Smoothness at idle and mid range is nice but it seems the electronics don't do anything for us zinging the engine around. But hey it might help for acceleration of rpm for the hard core aerobatics people.

So I think till something comes out like the Gami Prism which will probably be hugely expensive ,but allow us to run not so high octane without worry of detonation without having to remove higher compression pistons later.... or we can just take those high compression pistons out... (I'm planning on 9.5 instead of the stock 8.7) I'll just stick with good old retard breaker mags for now, that I have.

You would think their would be competition by now for the Gami Prism concept. http://www.gami.com/prism/prism.php

Meanwhile it would be nice to see the true and correct internal diagram for the 1001 and 1002 to see what all the hoopla is about other than Slick deciding they don't want to help Bendix mags run better than with the old Shower of Sparks.

Could be only a STC designator on the 1001 to 1002. Never had time to investigate, as I was working on only Cert airplanes and did what was on the paperwork.

I bet someone in here in this wonderful experimental world here has checked it out.
G

"I have always wanted to, but never have had the time to figure out where to find a diagram of the internal difference between SS1001 (for Slick) and SS1002 (for Bendix)."

I was told by a sales person that physically there is no difference in the two. He said it was just easier to do the approval paperwork separately.

We were told by one of the Slick Engineers that there was actually a difference back when they made both of them. The difference was a chip that was used in the electronics. The one they used for the Bendix was no longer available and since they were supporting Slick Products they just quit manufacturing the Bendix one since the parts were not available. All this being said, I know of a person at our airport that has the Slick model number installed on his aircraft with Bendix mags and it seems to work just fine????

It looks like I have a model suited for Bendix mags, where I have Slicks on the engine.

Here is a great article on all things magnetos.

Edit: Exchanged this out at Wentworth (Aircraft Salvage) for correct Slick magneto version. They have a number of Slick Start units, both for Bendix and Slick magnetos. 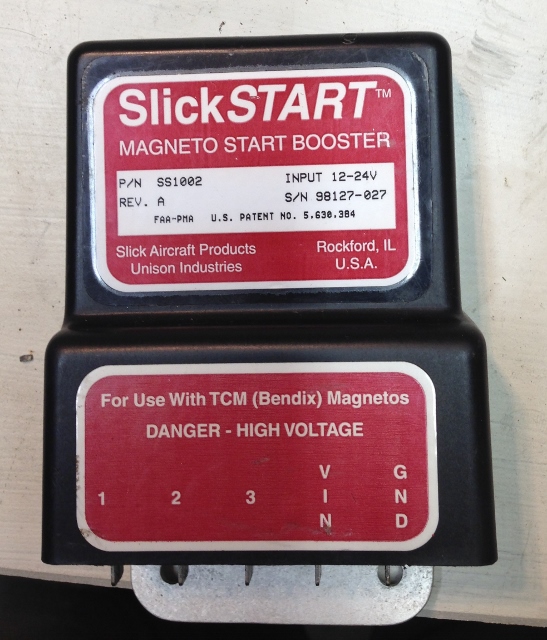