What canopy do I have

Attached is a pic of my Smith Mini with the canopy on. This plane sat abandoned in a hanger for 15 years before I got her. Now the canopy is detached from the plane. I have the outside rail that is attached to the canopy and I have the inner rail that is attached to the fuselage but am missing the middle roller part of the slide assembly. I am wondering if someone else has the same or similar canopy and might have a lead on where to look for a replacement slide. The over all height of the outer rail is 1 and 1/4" and I can find nothing that matches that height. I may have to replace the entire slide assembly but am hoping someone can give me a lead. I have seen this canopy on other bipes so I don't think it is a "one off" but I don't see it at Todd's or Steens. The trailing edge of the canopy has a bumped up part to clear the headrest. The log book shows when the canopy was mounted but no info on what it is. 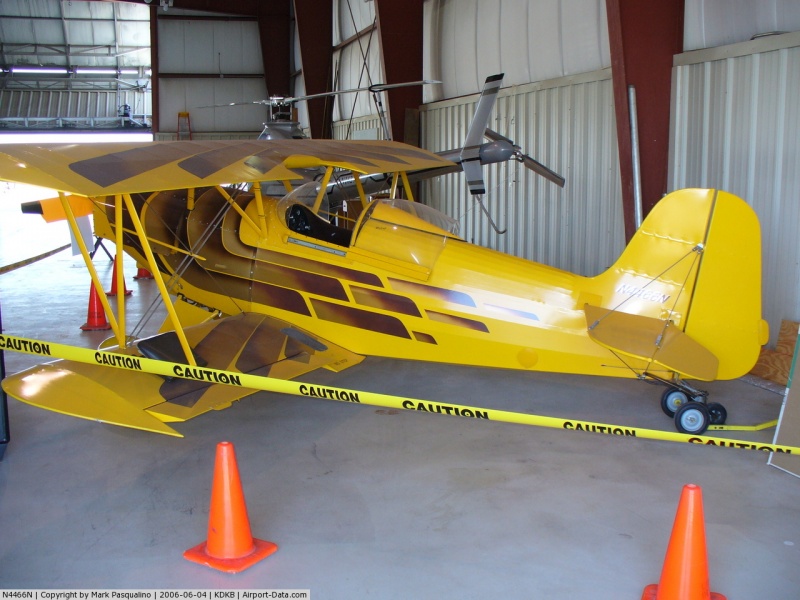 If you have a closer/better picture it measures the same
As my drawer slides on my Kennedy work benches. Any part numbers anywhere?
Dave
J

The slide part looks like same as Pitts S1S. The part# would be on their plans, but I think it was a knape and vogt KV-1480 drawer slide, long since out of production. You could easily fabricate the slide. It is a equal sided channel w 6 holes in it to hold 6 (3top&bottom) SS balls, about 6-8 inches long. Someone on this forum probably has dimentions. Jerry

Hi Larry:
I considered that mini, it was on barnstormers for a while but it was almost 2000 miles away. Bought local. Being a retired woodworker I have put in a lot of drawer guides. Be aware that you can buy a 20 inch guide and the drawer will open about 18 inches or you can buy a 20 inch full extension and it will open 20 inches. You can also buy stainless at the boat suppliers, at twice the cost. Mine hinges, would prefer a slider.

Congrats on the buy, it looked like a good deal.

She is a good one I believe, but not protected during a spray paint session at some point in the past! Grrrrr, I have over 20 invested hours and have not finished cleaning the fuslage yet. However I am getting there.

I can not find any numbers on the slides anywhere, but have not taken them off yet. That is my next/last step.
Sorry but n o closer pic here but will get one this week.
L
C

Congrats on a good looking Bipe!

Larry Lyons said:
She is a good one I believe, but not protected during a spray paint session at some point in the past! Grrrrr, I have over 20 invested hours and have not finished cleaning the fuslage yet. However I am getting there.
L
Click to expand...


This is a good looking plane for 15 years not used, (by the picture)

Maybe this can help to get rid of it?

Funny, clay is exactly how I got this far. It does a beautiful job but is labor intensive and slow! However the left horizontal stab and elevator are not being cooperative. I can soften the base color and remove the over spray but that is a tricky maneuver. So far I have been able to do that, then go back and buff out the base color. It worked until I got to the left tail as that was sitting closest to the painting. I have not tried MEK but intend to today. Carbon tet (sp) was working but it won't touch the tail. the right side cleaned up OK just the left side is left. Using 600 grit buffing compound has worked on vertical surfaces and worked on the canopy, thank god!

Larry.
I feel, in fact hurt for you!!!
So something was sprayed in the hangar at the time this was parked.
If they were spraying a Urethane paint, then you will have problems getting the overspray off.
The inconsiderate idiots! I'm sorry but this error can be so expensive to put right...even up to a sand down and repaint of contaminated aircraft.

I had my blacktop drive way resealer with that black tar spray on stuff, I found out later.
Anyway, the hangar door was way open when they sprayed and the wind carried the airborne stuff and provided my yellow Citabria with a nice overspray of black, everywhere, including windows.

Luckily the degreaser I have could desolve that black driveway sealer. But a hell of a mess washing the overspray off. Then I had to go and wax the airplane, 'cause with that much solvent wash, there was no protection.
The original paint was done by American Champion Aircraft, a urethane enamel.

Here is a link to slide rails. These are the source of supply that Dave's Plane Canopies has.

Here are some pictures of what you are missing.

I just paid my premium membership to support the IT bees. Where else can you get so much for so little $30. Please support their diligent efforts.