WTB: Two place taildragger, Lycoming four banger, basic akro capable (at a minimum), suitable for tall pilot. I'd prefer something in Florida but that's not necessarily a deal breaker. No projects or airplanes that will become a project any time soon. Somewhat limited budget. I feel the need to get and stay current while I'm building.

I have looked at a 7ECA Citabria and a Reed Clip-wing and I'm still looking.

How about the O-320 powered Willie II currently on barnstormers.com?

I saw that ad but didn't seriously consider it since it is not a well known type and would probably be a difficult sale when it's time to move it along to its next home. I saw one 30+ years ago (the prototype??) and it did not make a good impression for some reason. Maybe it was because it looked like a S-2 copy gone wrong to my young eyes.

Thanks for the headzup Glenn!

I always thought of the Willie II as a S1C morphed into a 2 place. Not saying that is necessarily bad, just didn't catch on. If Curtis had done it and offered plans, I would have built it.
Last edited: Dec 23, 2013

Neil, the description of the Wiilie II as a S1C morphed into a two place
is pretty accurate.

Been flying mine for 36 years.

Have wondered what you find the stall speed of the Willie 2? Plane has always looked like a neat deal to me.

I found some more pics of the Willie II. If I was still looking to buy a bipe, I would seriously be looking at this bird.

The empty weight is 1088 lbs. with a Lycoming IO-360 angle valve engine and all heavy / old electrical accessories.

I'm looking for an airplane to own for around three years that will bridge the gap from my non-current state to being ready to fly my project airplane. What ever I select has be to a fairly easy to sell offering when the time comes. Something like a Skybolt, AS2 or S-2E would fit my needs better than an obscure type like a Willie II. And airplanes like a Citabria or clipwing Cub would not move me far enough towards the ultimate goal so I'd be looking for more airplane after flying those types for a while.

An S-2E is more affordable than an S-2A, S-2B, etc in terms of initial expense. Being EAB means maintenance costs should be lower. 'Limited budget' just means an S-2B, S-2C or a Model 12 can't be on my list but the right S-2E could be. Another reason to want an EAB over a certified airplane is that I would be free to move things around so that I fit in the airplane. A Citabria is marginal in terms of fit for me but it's not like I could modify the airplane to suit -- it pretty much has to stay the way it came out of the factory. 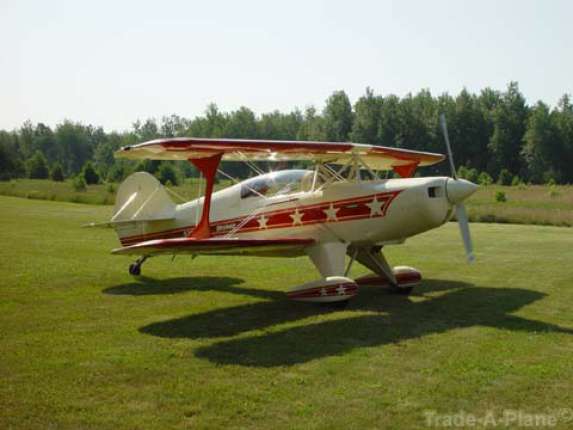 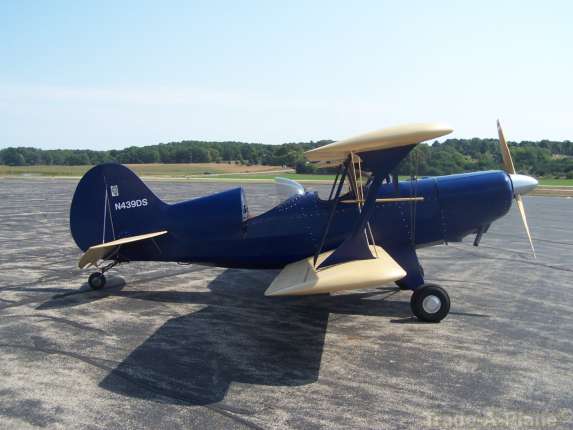 I had looked at both of those ads seriously. In fact the first looked like it might be a good one for me, but;

There are a couple of problems with this one besides its location and price ($55K for a 360-powered Skybolt??). Notice in the cockpit photo the sub-panel below the upper longeron. There's no way I'd be able to get in that airplane, much less be comfortable. And it looks heavy with the fully upholstered interior. Very nice looking airplane though.

This one doesn't have much visual appeal. The paint is very dull and uneven and the rear cockpit surround is kinda' ugly. The paint scheme is, well, pretty basic. I think it might be tough to sell this unless I was willing to wait out the right buyer. The price is attractive but, again, the builder mounted a couple of things below the upper longeron right where my knees will need to reside. Even the throttle pushrods are going to be a problem for me.

I wonder if the Black/White Charger ever sold? Glenn may know. Those are about as rare a find as the S-2E. The only real problem with the two is that you won't want to sell them when the time comes. I know what you mean about the rear cockpit sheet metal on the above Acro II. I believe we still have all the templates for that stuff if you ever needed them. I think it took about 3-4 hours to knock one out.

Glenn PM'd me about the Charger and he feels it had not sold. Way too far away and probably a bit too docile for my purposes but a very attractive airplane.

As for the AS2, that airplane has 'project' written all over it. I need to spend as much time as possible on the real project.

I know what you mean about fitting tall boys in airplanes Bill but not for me(I'm 5'11") my son is 6'3" and still growing. He is 14 and is already getting cramped in a few airplanes. He is supposed to hit 6'6" according to the doctor. I think building him a wag aero cub with the rear rudder pedals located further forward is a possible solution. As far as finding an airplane to stay current, you are a builder and will always find several things on each homebuilt that won't make sense to you but you knew that. It's going to be hard to bring one home and not turn it into a project.

Yep, I knew that. It will be a test of my tolerance for sure! I can overlook PK screws holding panels on but not nuts and washers. I'll really need to see the airplane to make sure I'm not put in THAT situation.

Being tall is no bargain. You are excluded from doing lots of things even short people can do by sitting on cushions, etc. If my legs were 3" shorter the list of airplanes I don't fit in would shrink to almost zero. I hope your son stops growing soon

I had similar concerns when looking for an airplane. I am 6'6" on Monday and 6'4 by Friday. I am not saying it is luxurious, but I fit in my Great Lakes just fine. It was slightly harder to climb into a Skybolt because the aileron torque tube was in the way. A guy I met at a competition flew an s1 that was built longer for a taller person and I guess a lot of them are. He is about 6'4.

My S-1 project has 5" added in the cockpit. I'll actually fit with some comfort possible!

I have some Great Lakes time. Fitting was no problem but it wasn't comfortable -- very few airplanes are comfortable for me. I'm not really considering a Great Lakes because it's a big step back into an S-1 from the Lakes and I'd like to have better akro capabilities.

What about a Starduster 2? You would fit fine in all the ones I've seen. They suppose ably land alot like a Pitts. Are plus 6 minus 6 rated. They say not for aerobatics but what does that mean? On a plane that's rated for plus 6 minus 6 (at 1704 gross) I'd think the roll rate and weight would be only real aerobatic hold backs. They are cheap for what they are...lots to choose from...sell fairly easy. Seems to me you really need a Starduster Too, Skybolt or Pitts S2E to fulfill your mission. And it seems you will probably only be "happy" with the "Pitts". Maybe a Acroduster Too would be even better?

I much as I admire the looks of the airplane I didn't specifically list the SD2 because it would not be my choice as an akro airplane. I did consider one that was close enough to go have a look at but it wasn't the right airplane for me. The updated MLG location and longer engine mount had not been done and the fabric was showing its age. The owner was lighter than me by quite a bit and he had to watch the CG carefully to stay in the envelope. Another issue was the cockpit layout which had the throttle set low and some things mounted in places that would conflict with my legs.

In general, yes, you can do akro in the airplane but I think it is pretty limited. Maybe more limited than an AS2 because it's a bigger airplane. At least the AS2 was designed with akro as its mission. The AS2 and Skybolt are very similar to a Pitts so there will be a comfort level there for me on the maintenance side. I know very little about Stardusters.

I don't know about how I would fit, every airplane is different. Normal sized builders tend to mount things in places where a taller person would not. I don't want to have to rearrange an airplane's cockpit just so I can get in the thing -- too much effort taken away from my 'real' project. And there's the very real danger that once I had the airplane apart to do the work I'd chose to do a couple of other changes,,,,,,, and now I have two projects.

EDIT: The Acroduster Too really has no appeal for me. I was active in competition when they first came out and remember thinking the airplane just looks too heavy in the air to fly well. It was hyped as an airplane to compete with and beat the Pitts but that was not the case. Then there were structural issues and at that point they kinda' left the scene. I'm sure the structural issues have been dealt with but the overweight issue probably hasn't. I can't see an AD2 with a four-banger being a very interesting airplane performance-wise.


You are right, of all the possibilities an S-2 is probably the only one I'd consider keeping after my project flies.
Last edited: Dec 26, 2013

Mr. Bill, are you dead set on a 2-holer? I have a very well-built S-1S that I'd like to sell in order to buy the LOM-powered Great Lakes. The Lakes is practically in my backyard, and I've figured out that I'm not inclined to practice enough to ever be able to need or use all the acro performance that's packaged into a Pitts. I've owned and enjoyed a GL in the past and with seat up front, it lets me take a passenger along occasionally.

Maybe that's what you want too, but if you're interested in great little acro mount that's very affordable and that ought to be relatively easy to resell when you're ready, please give me a yell. (This one's had the seat pan modified to accommodate taller pilots. Might not work for you from rudder to seat back, but the pan has been lowered because the fellow I bought it from was about 6'4", and he needed the vertical room to be able to keep from rubbing his head on the canopy. I'm only 5'8", so I have to put rubber pads under my seat pack in order to see out of it, and I have to put a cushion behind my back in order to reach the pedals.)