No clue why the website keeps flipping the photo over automatically. 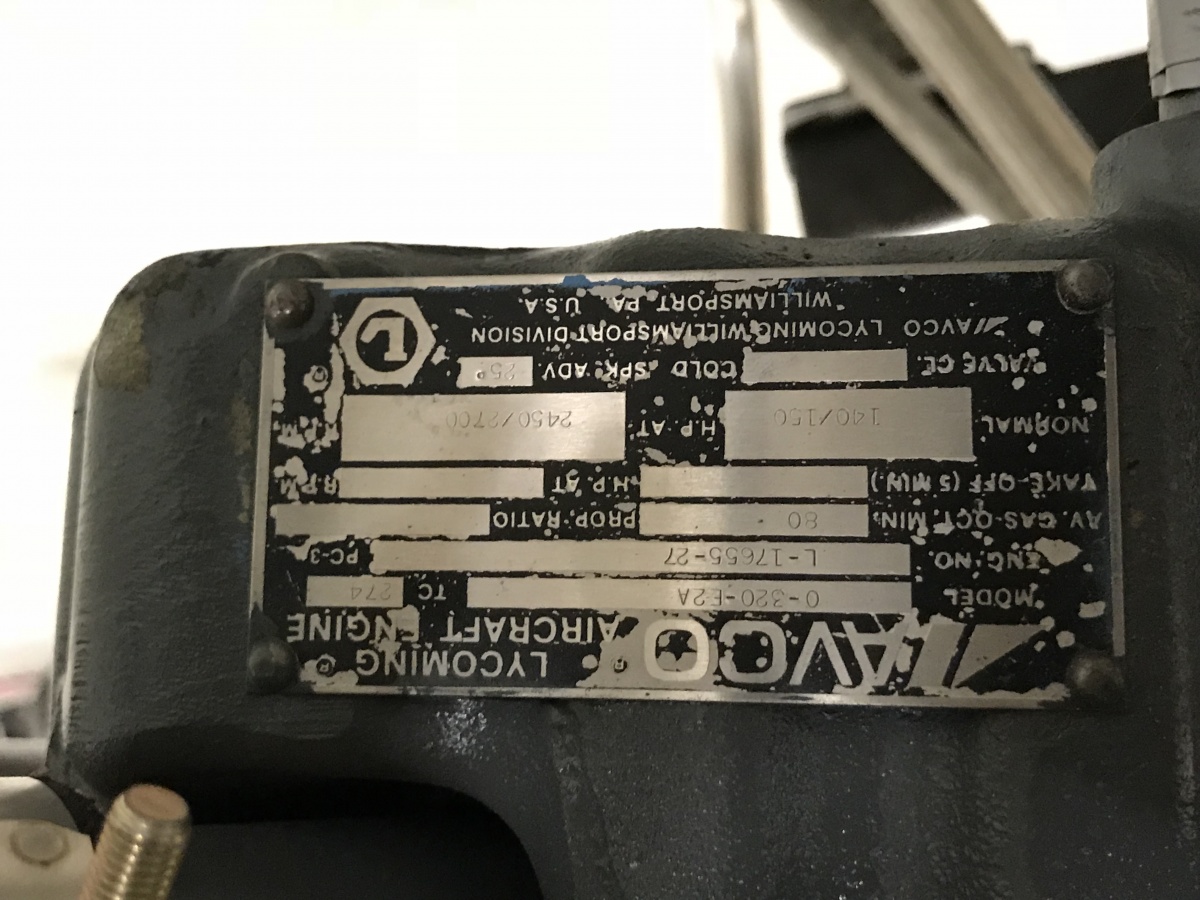 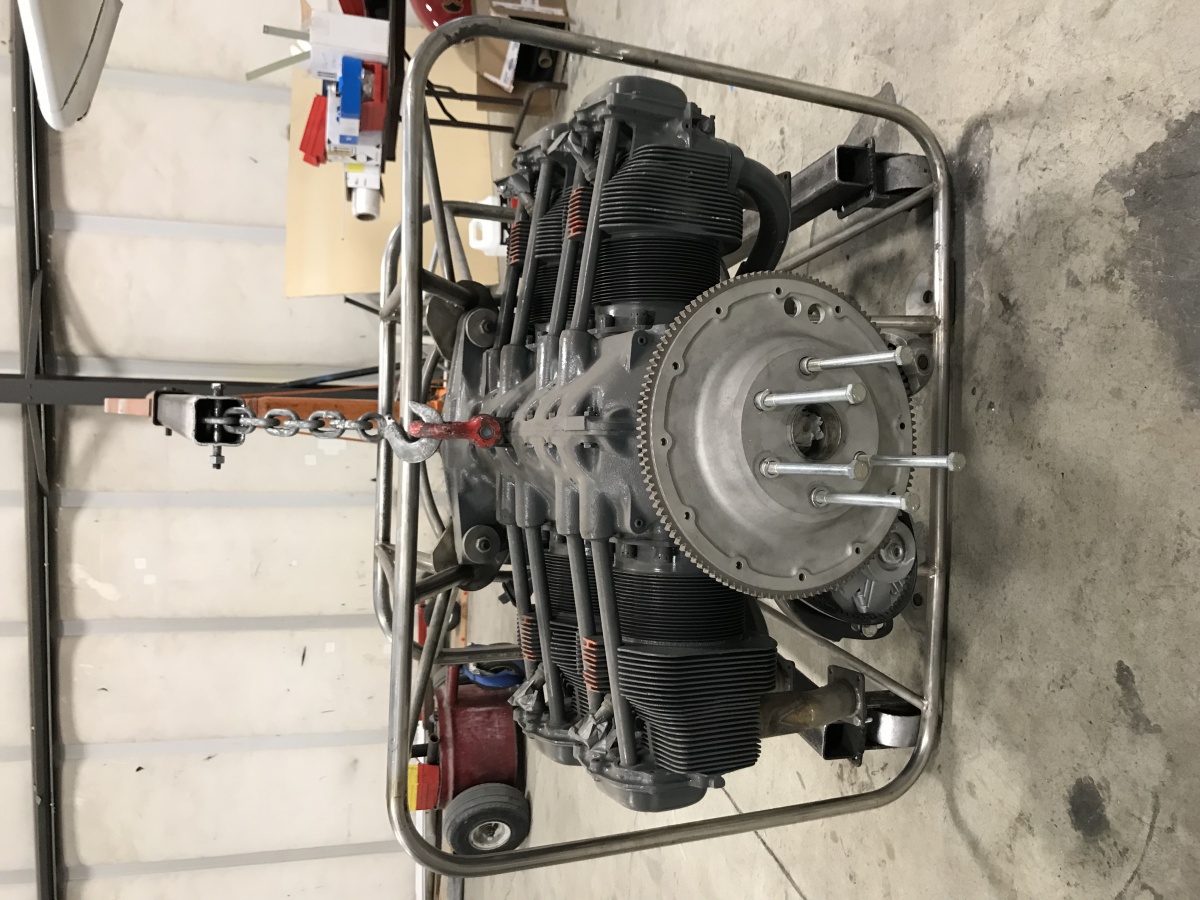 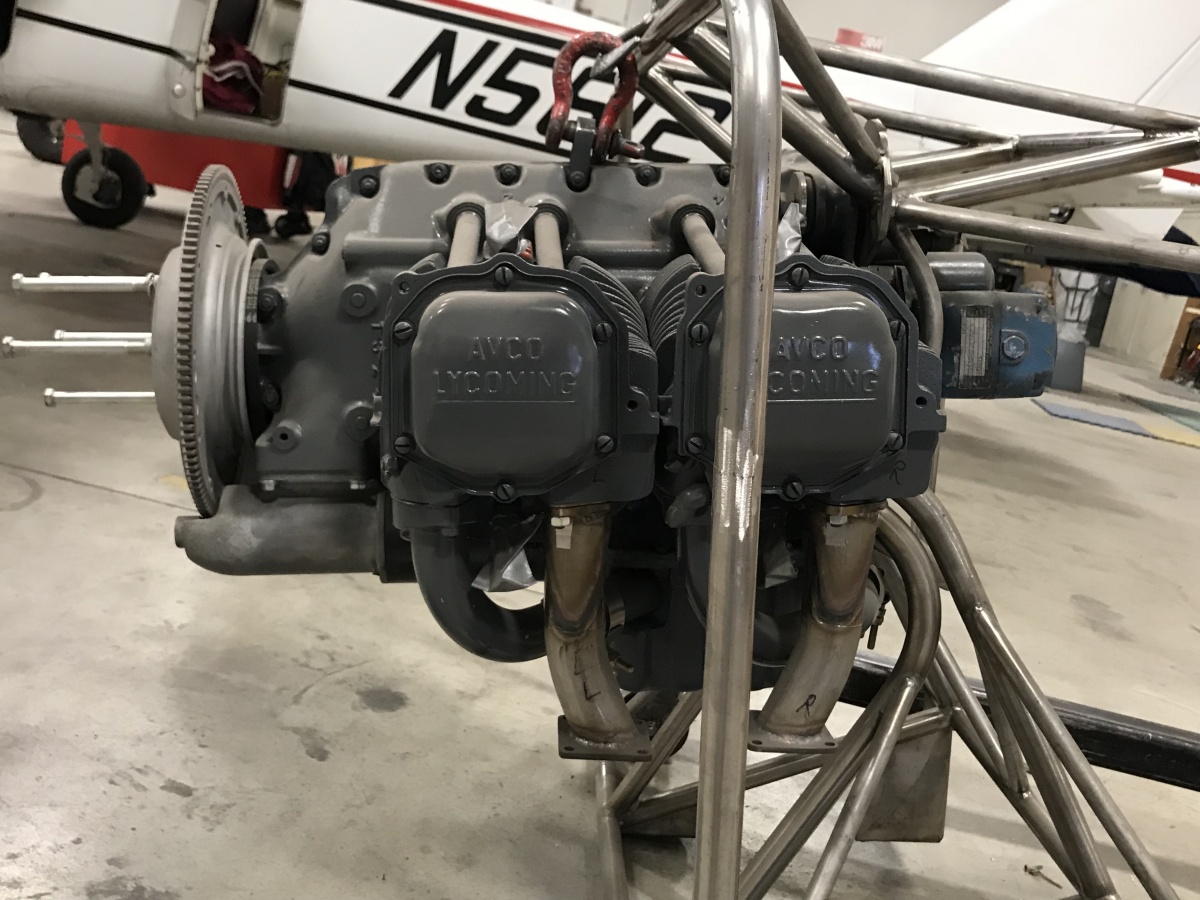 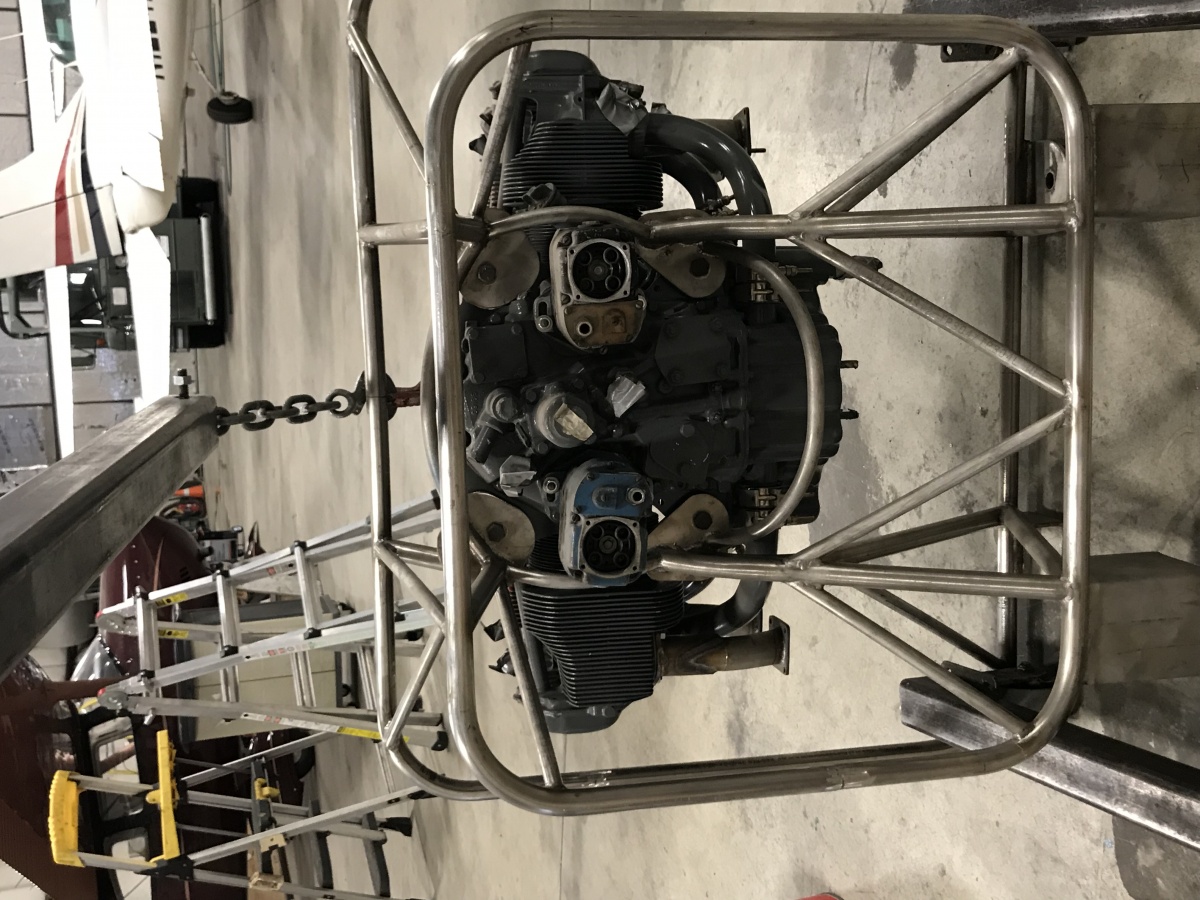 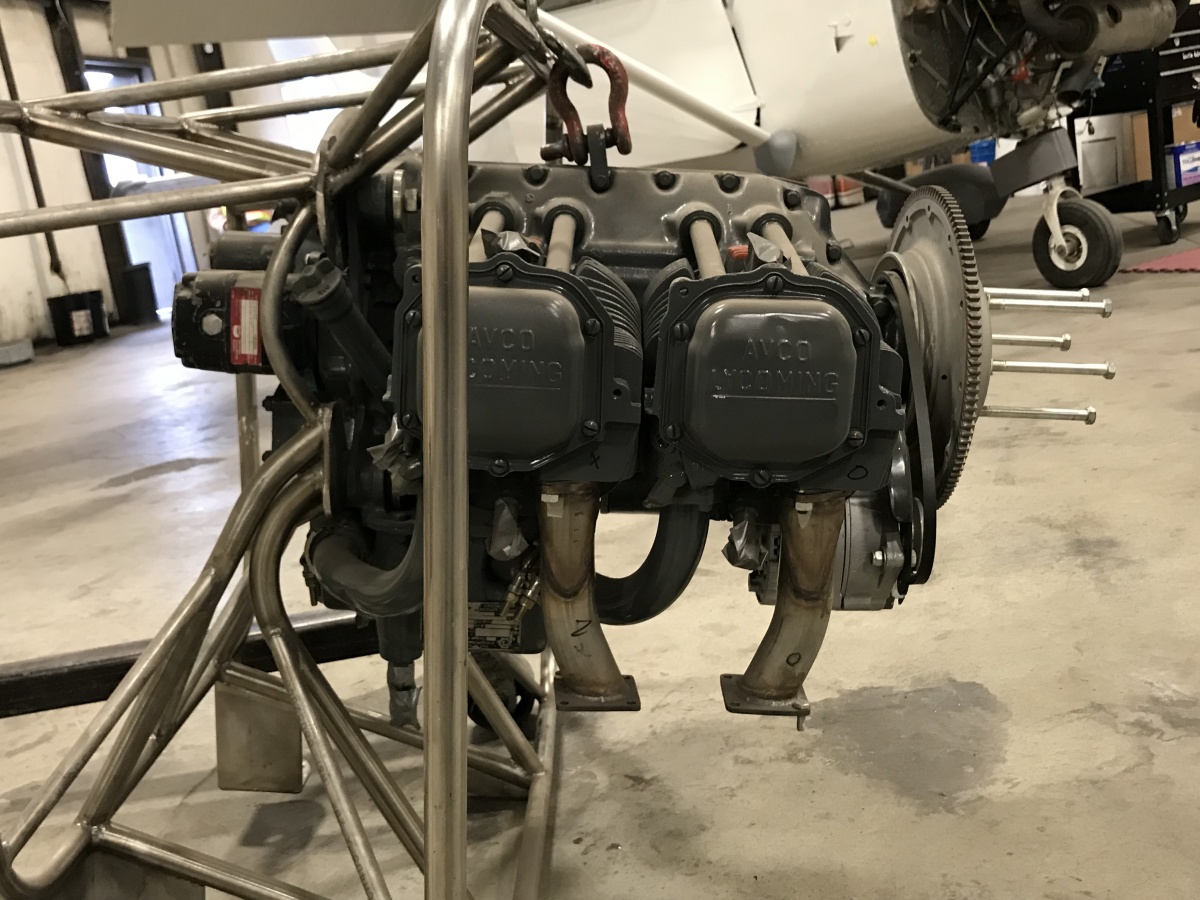 There's almost enough tubing in that engine stand to build a Pitts fuselage!

I'm not super familiar with all the suffix definitions, but according to the list on Wikipedia, this engine is designed for fixed-pitch, and the most notable thing about it seems to be 3/8" prop attach bolts. I feel like it would be insane not to look further into this, as this is the engine I want for the Charger, though I'm still years and years from needing an engine.

Can anyone tell me more about this model and pros and cons with this specific suffix? I'm off to look up ADs and such, and I'll be calling Chris with the obvious questions about condition and storage.

I have an O-320 E2A in storage. It came from a Cherokee 140 which I think was one of the principal users of this designation. Mine is a wide deck type 1 dyna focal. Not sure if the same engine came in narrow deck.

I called today, and figured I'd pass on the notes that I took from the phone call.

The engine was pulled from a PA-24 (he said PA-24, but probably meant PA-28) to exchange for a larger engine, and did not suffer a prop strike. I didn't think to ask for the total hours on the engine, but the person I spoke with said it was "zero time" and came without logs. It was torn down, and the pistons, rings, bearings and seals were replaced. The crank was mic'd for runout, with the implication that it was fine. Nothing was Magnafluxed or inspected beyond visual. After it was put back together. it was stored in a dry location, and pickled with dryer plugs. It now sits on an airboat mount, which goes with the engine when it's sold. It includes the starter, carb, and mags, though the mags need to be overhauled, and it will need an ignition harness. The carb might be an MA-3, but not for sure. The person I spoke with said this particular engine wasn't subject to the various crankshaft ADs that hit the O-320 line. It has an aftermarket alternator mounted, described as "very nice."

For myself, it's far enough away, and has enough big questions hanging over it, (and I'm so far from needing an engine) that I'm not going to pursue it.

No yellow tags? No mention of an A&P doing the work? Airboat stuff? Very questionable. I would hesitate to run it without taking it back apart..

If it has anything to do with airboats all it is in my opinion is a $3,000 data plate. The only reason he said no AD's are on the crank is because airboat guys don't comply with AD's. Glad you passed but there looks like at least 200 bucks worth of SS tubing on that mount! Do they have airboats in Idaho?
Last edited: Dec 6, 2017

Sounds like a core. With no data on crank, cam, case etc etc it might be a great deal if everything checks out ok or it might be a core that needs everything. What about the cylinders? Any chance they are new or overhauled with paperwork?

I&#8217;ve known the guys (A&Ps) for about 20 years. They&#8217;re great guys. Chris Ogden works for the owner and I&#8217;d trust anything Chris worked on with my life. I flew for the charter company he worked in the shop for for 9 years. Honest guys for sure.

A new crank is worth more than the entire damn engine! Send it to a rebuilding shop and it would still be fantastic deal

It would be a project for sure

Taltruda said:
No yellow tags? No mention of an A&P doing the work? Airboat stuff? Very questionable. I would hesitate to run it without taking it back apart..
Click to expand...

My understanding is that an A&P mechanic did the teardown and rebuild, though I'm not positive.

From the description, the tear down and build up was just about all that was done. No mention of any type of NDT of any parts as is routinely done in most every overhaul completed today. Thousands of engines in the 1930's through the 60's were done this way with varying degrees of success. There's even a nice two part youtube vid of a standard ''field overhaul'' done during that time. Most engines back then rarely made 400 hours between ''overhauls'' like this, and, as you can see, few if any major parts are given much of an inspection other than a wash in a cleaning vat, valve lapping, and re assembly.

Just because you don't see a crack doesn't mean it isn't there. I don't know anyone around this area that wouldn't have at least sent the crank, rods, and gears out for NDT inspection. Plenty of places around now and the cost isn't anywhere near prohibitive. Obviously this engine was overhauled with the original intention to put it to use in an airboat. The type of ''overhaul'' shows this and the price definitely reflects what they think it's worth.
Last edited: Dec 7, 2017

IanJ said:
My understanding is that an A&P mechanic did the teardown and rebuild, though I'm not positive.
Click to expand...

An A&P certificate means the holder has met the minimums required for the rating. It does not guarantee high caliber workmanship. I know a few A&P's with questionable work habits and I know many who are the opposite. There is always is some type of story with "no logs" but keep in mind they made tons of these O-320's. Just like anything else another deal will come along.

Seems to me the best option is to work with the seller. Make a deal where you will buy engine for x but you want the crank verified. If there was logs so you knew it was a x hour core off a plane thats different. Youre buying a known runout, with a known reason it was removed for. This engine may very well be a steal. Or it may not be. It sounds like the dude that is selling it is a stand up guy from the other posts. If I needed a 0-320 Id just give him a shout and see if verifying the crank is a option...at your expense. (If its good you buy engine. If its bad he gets a tore down box of Boat anchors)

Knight Twister said:
An A&P certificate means the holder has met the minimums required for the rating. It does not guarantee high caliber workmanship.
Click to expand...

Since we don't know the guy, it hardly seems fair to suggest he might be a bad A&P. He told me straight-up what the engine was, and I trust his description. He's just a guy who built an airboat engine and is trying to sell it.

IanJ said:
Since we don't know the guy, it hardly seems fair to suggest he might be a bad A&P. He told me straight-up what the engine was, and I trust his description. He's just a guy who built an airboat engine and is trying to sell it.
Click to expand...

Never implied he was. Only stated the A&P certificate doesn't guarantee anything.

I&#8217;ll throw out a different opinion. For $3,000, it would be a good deal if it was a runout. I was tempted to buy it and I don&#8217;t even need an 0-320. I can&#8217;t tell you how many engines we overhauled in our shop when I was growing up. My dad was just an A&P. Lots of those engines made TBO and several of them were used for ag work. Never did any NDT; just miked everything and replaced the parts that were out of tolerance.

Granted, I don&#8217;t live in mountainous country, so an off airport landing in this part of the world is different than lots of other places, so my tolerance for risk is higher here than it would be in a different part of the world. With that in mind, I wouldn&#8217;t be afraid to hang it on an experimental and give it a whirl. The likelihood of a catastrophic failure is relatively low, versus it giving some signals that it&#8217;s not a great engine. Maybe it will make metal or have higher than normal oil consumption, but it might deliver a bunch of trouble free hours before anything starts to go south.

I think Jim Stanton said we should always figure on having to buy an engine anytime we buy a used engine; in other words, every used engine is a crap shoot. Just me, but if I was needing an O-320, I&#8217;d gamble on this one. YMMV. (Let the slings and arrows begin! )

PS: The engine that we hung on the first airplane I ever had was found in a junkyard. An A-65 Continental. Daddy took it apart, and everything miked out to factory new measurements. Put it back together and I flew it for years. Lucky? Yup! But evidence that not all luck is bad. (I&#8217;ve also had my share of bad luck, but some of that happened in circumstances where we thought everything was A-OK perfect. That&#8217;s why we call it luck!)
Last edited: Dec 8, 2017
You must log in or register to reply here.
Share:
Facebook Twitter Reddit Pinterest Tumblr WhatsApp Email Link