I thought you guys might enjoy a quick update on the restoration of Lockheed Vega model 5C serial number 72. This is being restored for Kermit Weeks back to flying condition. It will be in Winnie Mae colors that it has had since 1969.

This airplane has a colorful history. Originally owned by Independent Oil and Gas, it was the first “Executive” aircraft built by Lockheed. It has a deluxe interior with features such as a dictation station fold out desk, typewriter, toilet and small lavatory sink. Pretty snazzy for 1929. As the years passed, this airplane served as an airliner in Mexico, was used as an aerial survey and photography ship and then was owned by General Electric where it was used to improve radar systems. Since the structure of the Vega is all wood, GE stripped the airplane of as much metal as possible, filled it with test equipment and used it as a very early “stealth” test aircraft with a small radar signature. Dave Jameson Bought it from GE in the 60s and restored it into Winnie Mae colors including the N105W registration number.

This airplane has been damaged at least 6 times from what we can find in the records. Most of these wrecks were in Mexico. It was damaged when being delivered to GE, another time while at GE and then the last time by Jameson on his first take off after buying the airplane from GE. These accidents were mostly gear collapses and ground loops. The poor fuselage took most of the hits. We discovered patches on patches in the skin, Many types of plywood used, some not aircraft grade, and repairs to a few structural diaphragms that were questionable.

The wing and tail were relatively simple to restore because the structural bones were in great shape needing only minor repairs. We installed all new skins on the wing, tail and ailerons after having proper Sitka Spruce plywood made for these components. We had hopes the fuselage would be the same type of rework as the wing and tail. Take the skin off, a few minor repairs and then replace the skins. The plan was to remove the skin from the left side of the fuselage, make repairs as needed, install a new skin shell on the left, then repeat the process on the right side. As it turned out, the fuselage structure would require more repair than we had hoped. There was some wood rot, some sketchy repairs and some parts were dimensionally incorrect when compared to the factory drawings. So, we are having to replace a majority of the wood in the fuselage structure.

We started work on the wing in 2013 but had a 16 month delay while waiting on the custom made plywood for the skins. By mid 2016, we had the wing, tail and landing gear repairs completed up through varnish and ready for fabric. We had the fuselage opened up on the left side and began the evaluation of the internal structure. At that time, the project was placed on pause until July 2019 when we picked up where we left off on the fuselage. We collected more data and information and mapped out a plan to rebuild the fuselage structure and skins. As of the end of 2020, we have most of the replacement wood fuselage structure components made, new skins made and ready for fitting, the fuselage assembly fixture made and are preparing to begin assembly of the fuselage structure. The process of designing tooling and fixtures, designing and making a skin mold, selecting, milling, cutting all the wood for the diaphragms and skins, etc. required more than a year. A year of taking big pieces of wood, cutting them into small pieces and then gluing them back together into big pieces. Beginning in January 2021, the fuselage structure will start coming together again in the fuselage assembly fixture followed by fitting and installing the skin on one side of the fuselage. From there, more internal work will be completed before the second skin half can be installed. 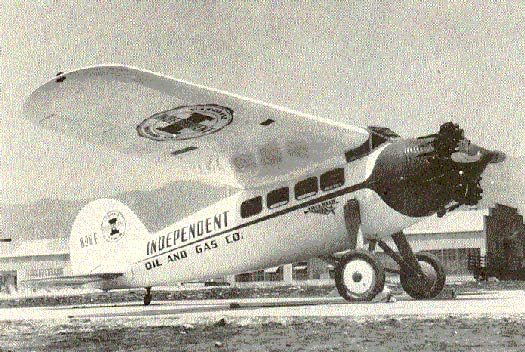 As delivered new in June 1929 before returning to the factory to be converted to a Vega 5C.
Model 5C conversion included shortening the nose 8” and installing P&W 1340, adding a cowl,
larger tail feathers, moving cabin door aft 1 bay, adding 5th window on each side,
adding 2 seats(increase capacity to 7 people), etc. 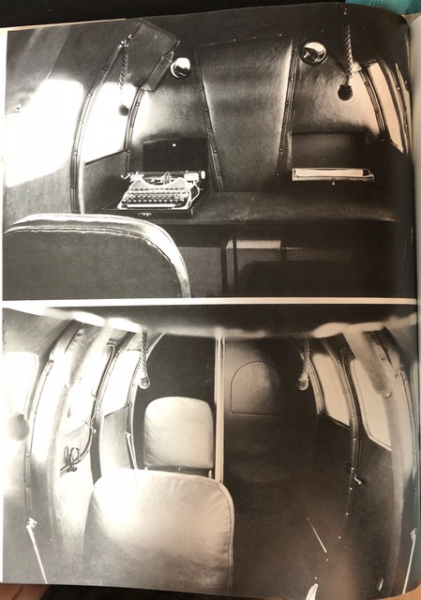 Original Interior, 1929
Top photo shows desk in open state with type writer. The deck folds in half and is hinged to the left wall and stowed folded down against the wall
Lower photos shows the Toilet(hard to see in the dark image) and fold out lavatory sink 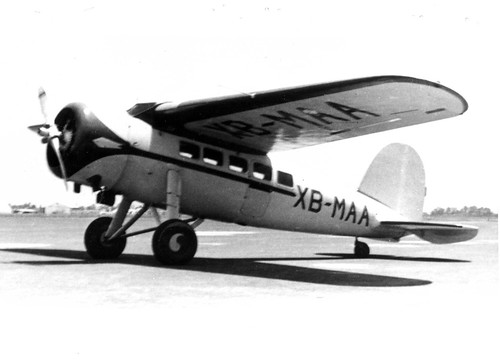 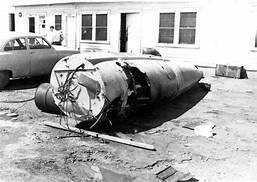 In Texas after being grounlooped on the way to GE, 1950's
Was trucked to Nebraska and repaired before flying to GE in NY 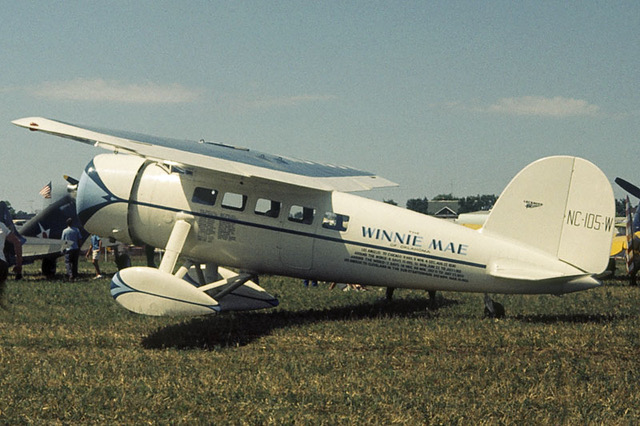 At Oshkosh after restoration into Winnie Mae by Dave Jameson, 1970's 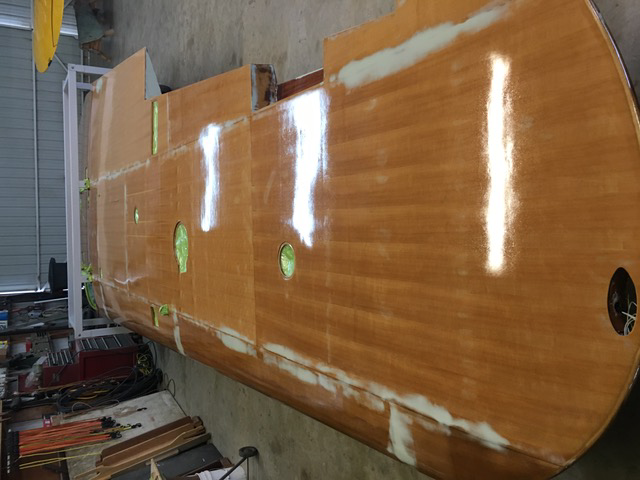 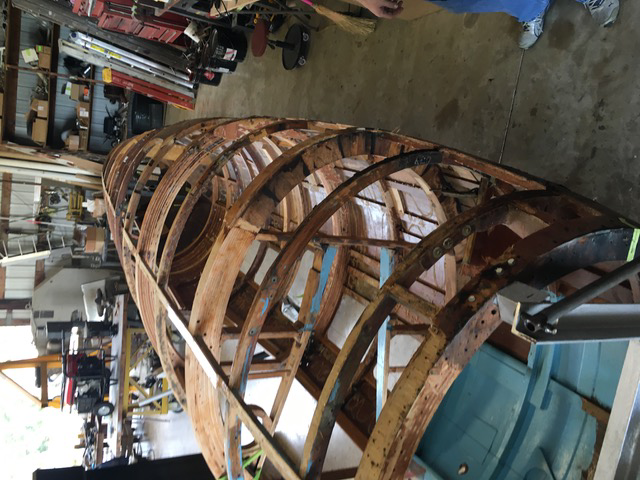 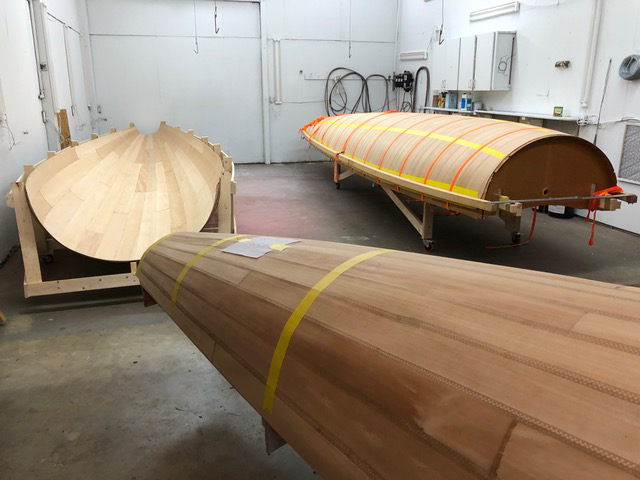 Skin halves (left and right are identical), are made of 3 layers of Sitka Spruce. 2020
.039” thick inner layer in foreground,
.078” thick meddle cross ply layer at far right sitting on the mold,
.039” thick outer layer upside down at far left. 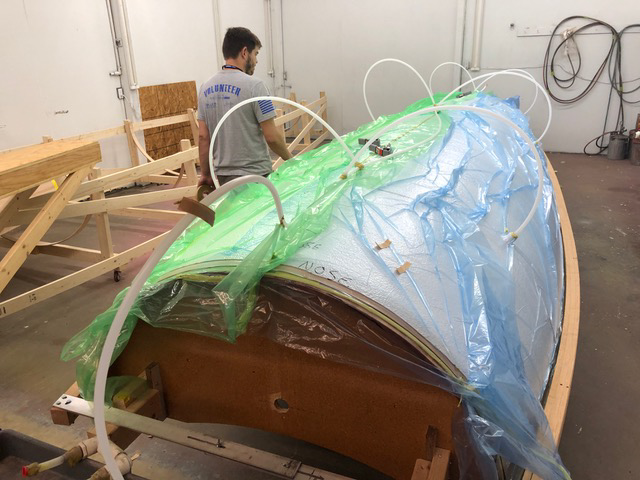 3 layers being vacuum bagged together on the skin mold. 2020 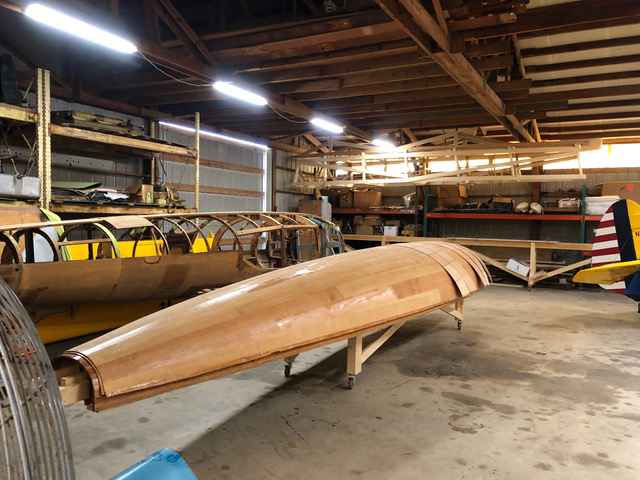 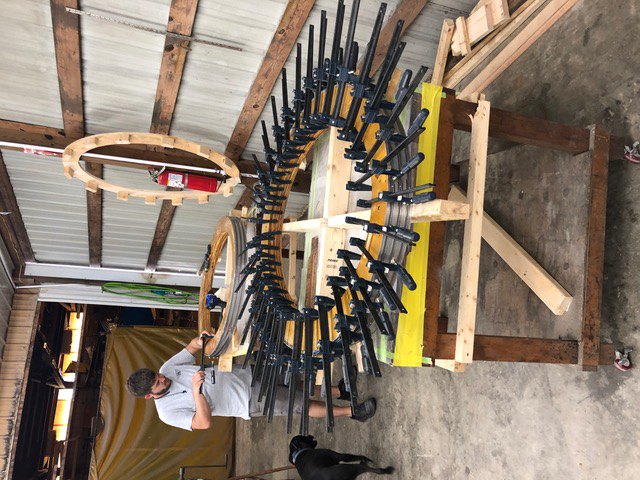 Typical of diaphragm construction. Laminate many layers of sitka spruce around a wooden form.
Add 1 layer per day. 16 diaphragms were laminated, some 9 layers, some 28 layers
total of 243 laminations in all. 2020 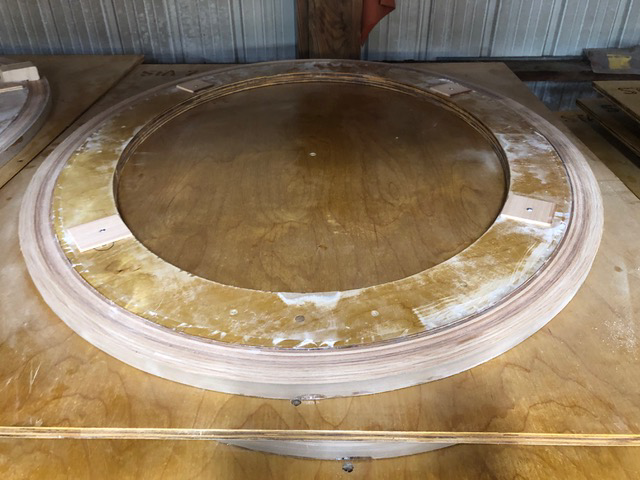 Typical diaphragm after laminating and final sanding to proper thickness. 2020 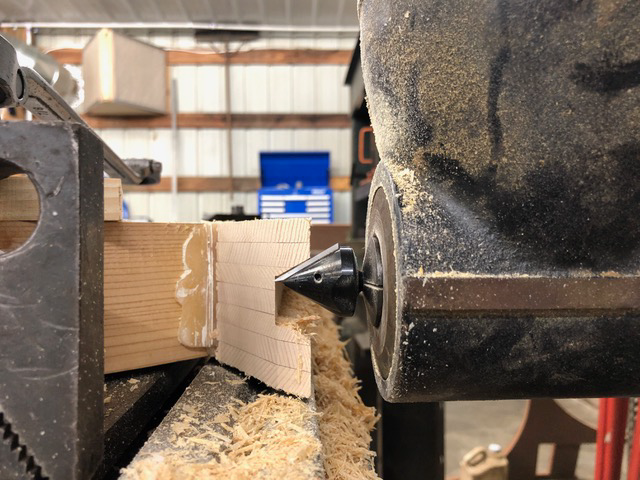 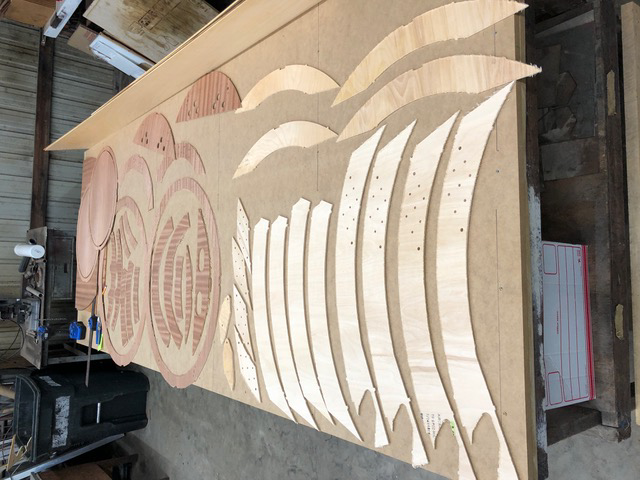 Plywood doublers cut and ready to glue onto diaphragms.
Mahogany and birch ply used as called out in the factory drawings, 2020 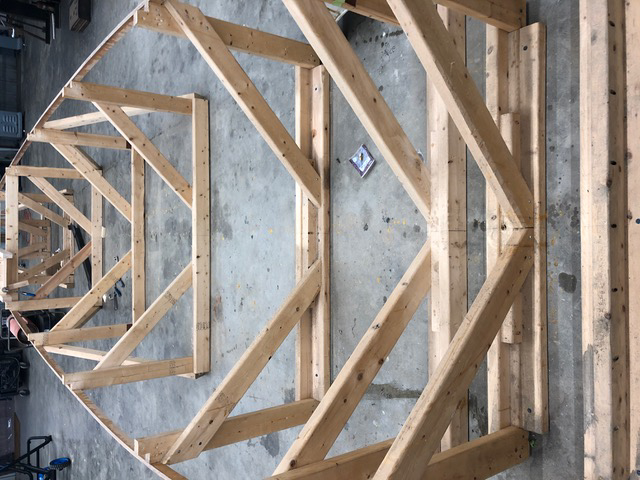 Fuselage assembly fixture bolted to the floor and laser leveled ready to accept diaphragms and longerons, 2020