I've been working on throttle quadrants here and thought i'd share my progress. This like most parts of my project has had ups and downs. This is an ongoing experiment.

I started by visiting a friend and measuring the faces and levers of the quadrants in their Stearman. I wanted something that looked about the same. Next I came home and put those measurements into a deltacad drawing and started looking for hardware that would fit.


I liked the Steen quads but i wanted to try to make them a little lighter and wanted to put the friction adjustment outside the case. I used all aluminum construction and all the same material thickness for all the parts. This was to try to cut costs when laser cutting parts. I went into this open to the idea that some components might have to be changed...like steel levers or brass bushings/plates,etc. but so far so good.


I found some knobs i liked at McMaster Carr. (My brother in law doesn't have a telescope scottly). I ordered those in plastic and alum. I also ordered some aluminum spacers from them.


I used a jig saw to cut the top curve shape out of a wooden block, then sandwiched the top metal screens between the block halves...bending the tops. I originally was going to bend over tabs and use sheet metal screws to attach the tops. I wasn't happy with the fit so i'll attach the tops with a couple of small tig welds. I'm still working the top shape inand will sand and polish when everthing is attached.


Originally i used round bushings between all the levers and case faces. This was a big no-no. As you add friction each lever rotated passes that action to the next bushing....result is pulling throttle back and having the mix go to cut-off. I know i should have seen that coming. Solution is to use a plate to isolate each lever...check out scottlys earlier quadrant posts. I was able to quickly cut those out this morning and get back on track.


Next i'm going to thread the tops of the levers and screw the ball knobs on with glue. The levers will also be bent slightly angling the knobs toward the pilot for clearance. The top lever is intended to have a handle made on the lathe of bar stock (hollowed).


You'll also notice i put a friction knob on both quadrants...this was an oversight also and will most likey change out to a simple bolt to avoid a passenger inadvertently locking the quad from the front. 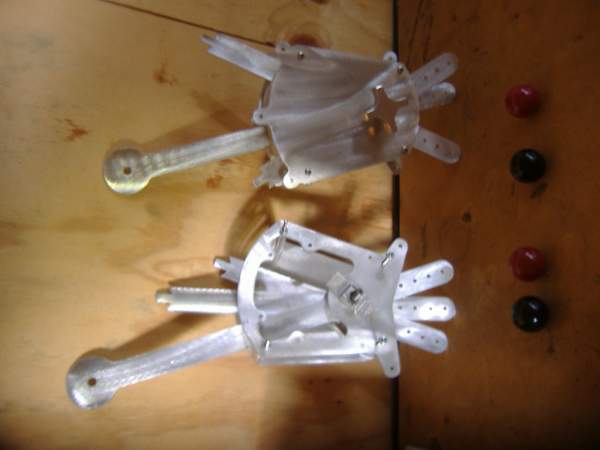 What happened to the Baby Great Lakes, tiny Stearman?!?