This post shares some sketches for an aluminum rigging board I made for rigging my Skybolt wings, as shown in the photo.
After about five years of work on Skybolt N32DA I have finally reassembled and hangared it. I was reading up on how to adjust and tension the wing brace wires and found this link where Mr. Macwolf (Thank you, sir!) has posted "Rigging a Pitts" and Pitts &#8220;Rigging Boards&#8221; reference documents:

Since the Skybolt has the same single piece upper wing configuration as the Pitts, I found the "Rigging A Pitts" procedure document to be perfectly suitable. I figured I would try to adapt the design of the Pitts &#8220;Rigging Boards&#8221; design to the larger Skybolt wing section. What I liked about this design is that evidently the same rigging board is suitable for use on either the upper or lower wing. Although the Pitts &#8220;Rigging Boards&#8221; drawing does not explicitly state so, it appears the two contact points on the upper surface were chosen such that the rigging board remains parallel to the airfoil chord line whether the board is placed on the upper or lower wing. So I resolved to rob this clever feature for use on a Skybolt rigging board variant.

I went shopping at local lumber stores for some one inch thick wood that would be suitable for making this design but became frustrated at not being able to find straight enough wood. While sighting down raw boards there always seemed to be some perceptible amount of swale or unevenness to them. And I don't happen to have a jointer/planer that can true up a warped board. While at Lowe's I happened to notice they were selling metal straight edge rails that are intended to be used as a guide for cutting 4 X 8 foot sheets of plywood or other panel material. You clamp a flange on this straight edge rail to the plywood sheet and run the guide plate of a circular saw along the straight edge to get an even cut. There are two 49 inch rails in each straight edge set that you can join together to make one long straight edge. The 49 inch individual rail length seems to be a perfect length for a Skybolt wing rigging board, so I figured, why not use these as the basis of a metallic rigging board design? At about $25 bucks a set, they seemed like cheap precision to me, so I bought two sets, enough to make four rigging &#8220;boards&#8221;.

I started by noting the NACA upper and lower wing airfoil designations in the Skybolt plans and plotted these wing airfoil section ordinates in AutoCad. I obtained these airfoil ordinates from the classic reference Theory of Wing Sections by Abbot and Von Doenhoff. I then superimposed the upper wing profile over the lower wing profile in CAD with the upper and lower wing airfoil surfaces intersecting at the centerline of the aft spar. This is illustrated on page 1 of the attached sketch &#8220;Rig Board Skybolt&#8221;. This intersection denotes the aft contact point for the rigging board. The sketch shows there is a second airfoil section intersection point forward of the rear spar. This denotes the forward contact point for the rigging board. By indexing these two contact points, the rigging board may be used on either the upper or lower wing and the reference rail will remain parallel to the airfoil chord line.

The location of the contact points over the aft spar and forward of the forward spar avoids interfering with any rib lacing cord bumps on the upper wing surface. The thickness of the underlying rib cap reinforcing tape and fabric does fatten up the airfoil at the aft spar. However, the distorting effect of fabric layers and reinforcing tape should be constant across the wing span whereby rigging out wing wash-in or wash-out should still be accurate. The only case when having the rail parallel to the chord line matters is when drilling in the spar to fuselage or spar to cabane attachment bolts during construction or wing replacement. In these cases, the fabric cover normally has not yet been installed. If the leading edge is already on, the rigging board rail can be made parallel to the chord line by shimming the aft contact point of the rigging board using a sample of the leading edge material.

This rigging board design features a crosspiece angle for the forward contact point that rides on the wing leading edge. This feature stabilizes the reference rail so it won&#8217;t tip over or move after being positioned on the wing. As shown on the sketch, the leading edge snubber and aft contact point are made from .090 aluminum plate, and the forward contact point is made from one by one inch extruded aluminum angle. I used cheap 6061-T6 aluminum angle from Lowe&#8217;s and came to regret this choice because I had to do some straightening to obtain a true 90 degree angle. Better quality extruded angle from a source like Aircraft Spruce in 2024-T351 alloy is a better choice. Three feet of extruded angle, a foot square piece of .090 plate and two rail guide straightedge sets are sufficient to make four rigging boards that can be used as described by the &#8220;Rigging A Pitts&#8221; procedure. I was able to fabricate the parts and assemble four rigging boards over a long weekend despite the fact I am a pretty slow worker. 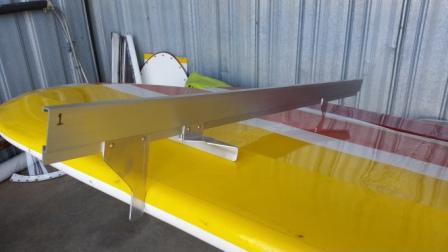