New to the biplane forum, have very much appreciated the insight and expertise. Have a long inactive C85 Excello
Smith flying now in Vermont, originally built and based on the Eastern Shore of Maryland. My original intent was purchasing just for the engine, prop, and airframe components for a Rose Parrakeet project I've been saving. It's turned out to be a far better airplane than I ever gave it credit for.

The Smith was built by a retired non-sched freight DC-8 captain who'd worked as an A&P and Cub instructor on the Eastern Shore before signing on for his first co-pilot job in the early '60's - C-46's for TransAsia in Taipei - which was actually being Shanghaid into flying for Air America in Laos (which he did NOT want to do). I did most of my A&P training (Beech 18's Honolulu) under an ex Air America Lao - so we certainly bonded well. A gentleman and a fine craftsman. Went straight from the DC-8 to the Smith, hadn't flown a lightplane since going unwittingly to Air America. The airplane is very old school built, really lovely workmanship. Took it apart, trucked it home, long annual - fixing a busted longeron at the landing gear, putting fire shielded hoses, Bendix mags, removing a neat but useless to me wind driven electrical system (night lights?) venturi and turn and bank, installed a proper military seat harness, remounting the windscreen to a more Parrakeet-like angle, and spent a fair bit of time making sure everything straight rigging it - just general sorting out. Empty weight is 585 lbs on calibrated scales. Has inverted fuel with flop tube and appropriate venting. No inverted oil.

Have been doing mainly functional check flights sorting out flying qualities, landing gear bungee and tailwheel/spring configurations, instrument shuffling and local degaussing to have a functioning compass, a/s cal, just general sorting out. About 4-5 hours flying now. Normally would have more numbers but with no recent currency have just concentrated on flying. At my weight and full fuel (15gal) the gross is about 875 with CG 31-1/2 % MAC. (Have set max aft at 33% just by convention). The cockpit is tight but easier to egress than most small biplanes. The Excello, my first, takes some understanding, but once sorted - starts first pull, hot or cold, no hesitation on accell, most endearingly, with the short stacks - has this great snort and crackle, but not noisy at all. The snort and crackle really keeps one grinning. Decent visibility. Free swivel locking tailwheel (light 1-1/2lbs), Cleaveland heel brakes, close to the pedals - just enough rudder authority to S-turn on taxi but brake needed for anything else. Take off power - surprising acceleration - rudder responds instantly - seems to take a fair push to get the tail up - hunts directionally like no other airplane I've flown but has plenty of control authority (I'm told the take-offs look straight but that half the acceleration may be the rudder flipping). Keeping tail slightly low seems to help with this and hopping on rough spots in the grass. Climb around 70-75 MPH CAS shows about 1100FPM timed on the stop watch on a standardish day close to SL. Handling is very tight, well harmonized, very deadbeat, no twitchiness. No discernible adverse yaw - whatsoever - is this a jet? Flies hands off after slight rudder tab correction after first flight. Cruise at 2400 shows just over 105 CAS (70/50 prop). Has pitch trim (with click stops - what a builder). Good longitudinal stability, long period phugoid starts with pause then damps in about 3-4 cycles. Good directional stability, neutral in roll. Power off stall just over 50 CAS good rudder authority into stall, no tendency to drop wing. Landing approach flown power off, curved and high with respect to the high induced drag. Around 75 CAS gives good feel into the flair, best touch down slightly tailwheel first. No directional control issues, transition to brake control at taxi speed, positioning of pedals and brake make this more comfortable than it may sound. Haven't yet flown in more than a 10-15 mph quartering cross wind, but felt fine in that.

A good illustration of the Smith's flying qualities - on the second flight a friend joined up for formation so we could compare airspeed readings on the ground (no radio) just to get a ball park on the airspeed accuracy before doing a proper calibration. As the airplane he was using is 10-15 mph slower than the Smith we switched leads - the tight control harmony and deadbeat response made flying close wing through turns and cross unders, and formation to overhead break for landing was much less workload than expected - particularly with my lack of currency.

For aerobatics the engine redlines at full power right around 135-140 IAS, which using the normal looping maneuver entry speed of about 2-1/2 stall (55 IAS so 135-140) is exactly where I would have pitched it. To be conservative used this for entry speed for aileron rolls, left and right - as expected excellent control authority - very little to no rudder input required. Slow rolls and 4 point rolls left and right very natural - excellent control authority - I think it can be slow rolled from cruise flight (but won't do this until I've spun it). Now using 120 IAS for any rolling maneuver. With the high induced drag I was cautious about looping. Using 135-140 IAS to enter and about 3g's have found with the top wing incidence about 1 degree higher than the bottom, approaching going over the top, just as one would start relaxing back pressure anyway - you can feel the top wing nibbling at the stall, so just back off and use the nibble to gauge the back pressure - works a treat. My friend watching me from the ground (we're in the sticks so we can aerobat right over the runway, well, the side away from the hangers) says they look round/roundish and so tight it's almost hilarious. Barrel rolls left and right are tight and fun.

Never imagined I'd wind up owning a cartoon plane. Looking forward to getting more aerobatic practice now that we have all the basic functional check flying done, but starting to get cold. Will fabricate the inverted oil pickup this winter. With the flat airfoil and high induced drag not expecting much, but probably will be as much fun falling out of rolling 360's as completing one.

This may be more detail than anyone wanted, but I've gathered there are few C85 Smiths, and that there has been general interest in little engine small biplanes, with little actual input from those flying. I'd prefer a lighter wing loading than the Smith, and a less flat airfoil, and swept wings for snap rolls... But to have this little airplane fall in my lap has turned out to be a distinct and unexpected privilege. 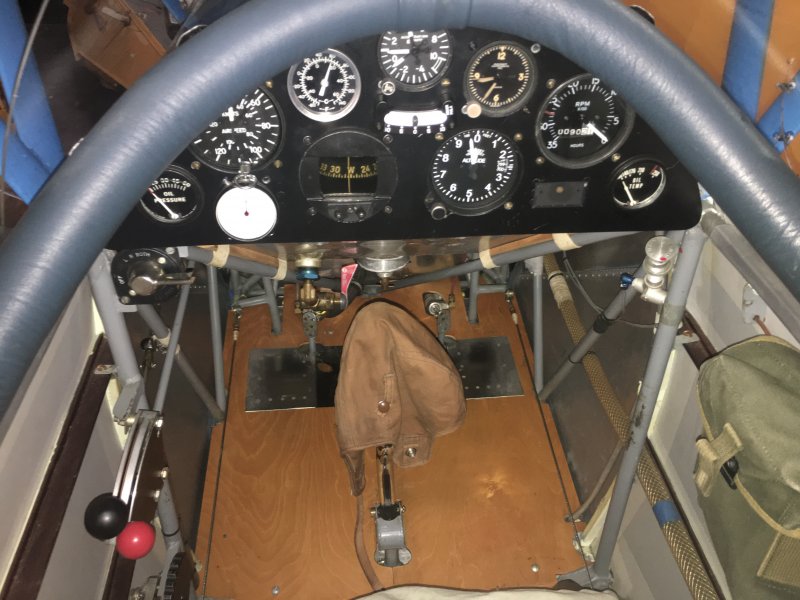 Culp Biplane/Skybolt with the M14
2 3

Stalls and Spins The Traffic Pattern
2 3 4