I hadn't noticed it before now but there was a little interference between the rudder pedal assemblies and one of the fuselage tubes (the vertical tube running from the front lower wing fitting to the front seat's cross tube). I immediately started thinking about solutions but I couldn't really understand why this problem was happening.

The rudder pedal assemblies have two main parts and five bolts holding it all together and connecting it the the airframe. There's the pivot bolt at the bottom of the rudder pedal, there's a bolt that picks up the rudder cable assembly, there's the brake pedal with bolts attaching it to the brake cylinder and to the tie rod running to the front pedals. And there's the pivot bolt for the brake pedal. That brake pedal pivot bolt is the thing doing the rubbing on the fuselage tube as the pedal moves fore and aft. Specifically the cotter pin for the castle nut was rubbing. But why?

As most of us know, when a bolt is not snugged down tight it needs a castle nut and cotter pin instead of a stop nut. Makes perfect sense because the bolt can turn and that might lead to the nut loosening over time. All the bolts I listed above are used as pivots and all of them, according to convention, need castle nuts & cotter pins. So why is this one bolt touching the structure?

If you look at the parts book for the S-2A it shows that location is no different than any other in the pedal assemblies, they all get the same treatment. But if you have an assembly drawing of the S-2A/E fuselage that one bolt is supposed to get a stop nut! The parts manual is dated 1984 -- well after the change over to the wide fuselage (2-2100-3). My airplane has a narrow fuselage (2-2100-1). That same 1984 parts book shows the narrow fuselage but it does not show the stop nut for the brake pedal pivot bolt. It dissagrees with the drawing. Or they partially updated the manual and there's a mix of parts and assemblies from the two versions of the airplane. Confusing, at least to me. 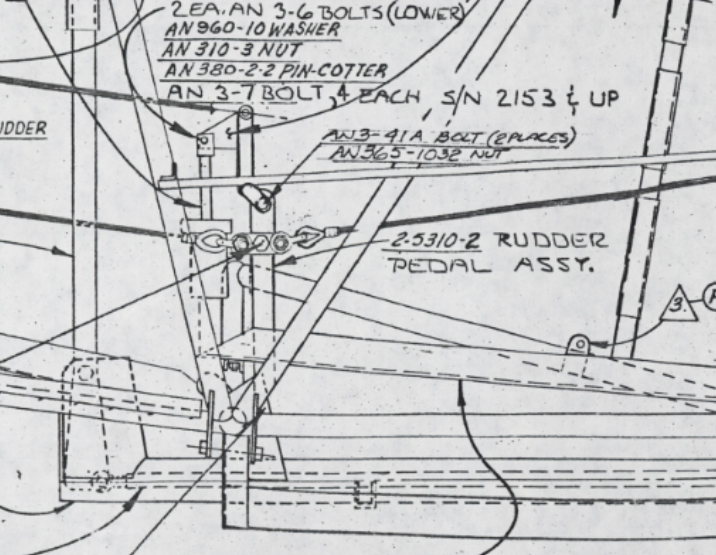 It think it's clear why the drawing shows that one bolt having a stop nut -- it's an easy way to gain a little clearance. But that became less of an issue with the wider fuselage which is also the reason the S-2B parts book shows the cotter pin.

So, all you narrow fuselage S-2 owners out there, please take a look at your brake pedal pivot bolt and let me know what hardware is installed and if there's any interference. I had pretty much equal contact on both sides. I eliminated the cotter pin and I now have a tiny bit of clearance. A better solution would be a minor mod to the pedal parts but I'm not going there......