Yeah Yeah Yeah I get it about 2/3 of you are like . I don't want to sound self centered but I don't really care what you think...mostly. I'll admit weather or not to embark on this mod I was thinking of you purists out there nay saying me and muttering WTF its a single hole Pitts! Whatever you fuddy duddies you dont know how to have fun with these experimental airplanes . Also for all those purists out there how many of you have flown a single hole Pitts across country? I have it was very tiring!! Anyway now that we have that all out of the way. I'll get into what I'm up too. Sharing is Caring right?

So I have been wanting an engine monitor for many years especially one that data logged for flight test data gather I also wanted to be part of the ADS-B out solution not a mooch. I would like others to be able to see me on their screens too. So I have been collecting parts for a major Avionics upgrade for well over a year but recently my solutions have landed in my lap in the form of a Skyview D-700, SV/220/221 EMS and two AP servos and control heads. So here is the system:

So to start why I ended up with the Dynon System, simple, There was one at work sitting in storage in that we used for several years as a flight test data unit that we pulled out of a plane when we installed a G3X system for a recent production upgrade offering. I made an offer on the system since it was sitting idle and got a very, very good price, too good to pass up.

I love the Trig Products and already had the TY91 radio installed for several years and had acquired at a TT22 and TN72 over a year ago as I was collecting parts. If I was to start over from scratch I would buy the Dynon Transponder and upgrade the GPS antenna to the SV-GPS-2020 for my ADS-B out. Solution. The trig TT22 and the Dynon Transponder and very similar units but Dynon has a custom setup and software on their unit that isn’t usable on the TT22 (I tried)

The install. Obviously, I needed an new instrument panel. I played around in CAD a lot. I modeled the trig control heads, downloaded a iPad Mini model, and the Skyview units are available on the Dynon website. I took a photo of the panel scaled it and sketched the shape since mine isn’t the same as the stock Pitts S-1S panel (its slightly different but enough that you can’t use it). I modeled in the aft cabane’s because they interfere with anything 1.5” deep so you basically have to work around them. I waffled a lot on whether to put in a steam A/S indicator and Altimeter but in the end, I installed them because I like them better for aerobatics for trending info rather than the tapes of the Dynon system. Side note, I know you can display a 6-pack on the Dynon but I thought it would be too small. I was able to use my CHT probes and Fuel Flow (EI-60 red cube sensor) that were already installed.

I wanted to build a custom panel out of carbon fiber. I laid up a 7 ply quasi-Iso 3K twill weave with a 90 deg angle. I bagged that to a table. This resulted in a 0.070” thick panel. I will body work and clear the panel later. I later cut the shape of the panel out on a band saw then laid up the 90 deg shaped flange. I could have done the whole thing at once but I wasn’t sure the shape was correct so I checked it first on the plane. (sorry no photo of the layup hands were too sticky here is the flange layup) 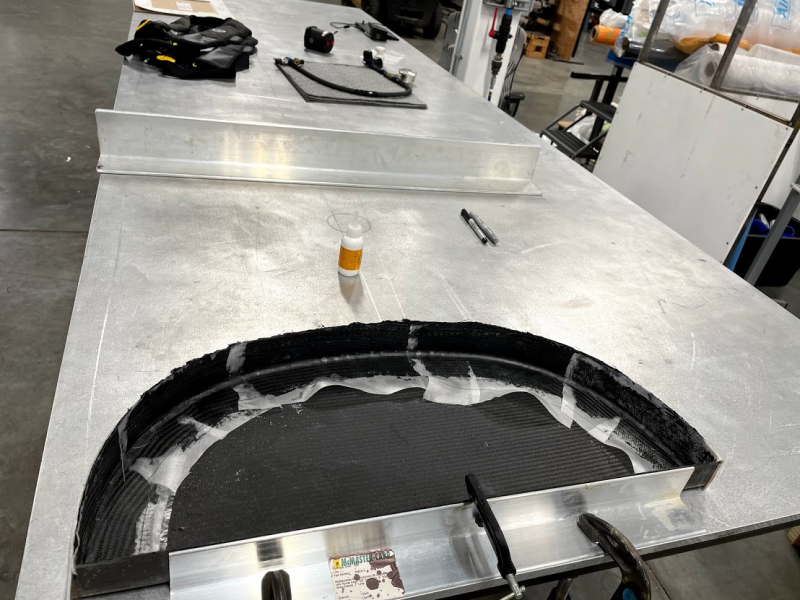 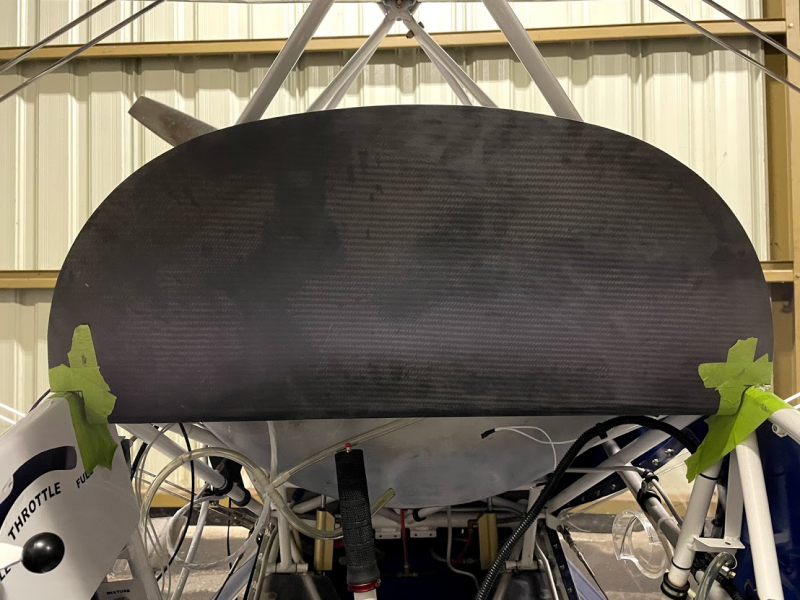 I printed out the final drawing template for the panel cut outs and trimmed out the holes I needed. I had to do a little custom filing to get everything to fit just right. 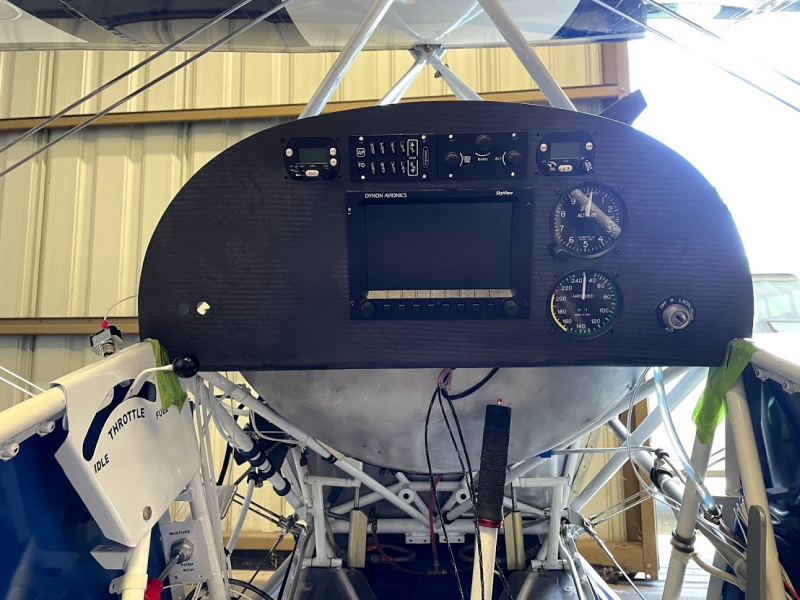 The autopilot servos I got in my system purchase were SV-32C or Capstan configuration. Its pretty easy to convert them to SV-32 or SV-32L if you know what you’re doing. I downloaded the servo CAD and isolated the lever arms brought them in to template and milled them out. The levers swap easily with the capstans. I had to use a SV-32L arm (long arm) on the pitch because of the idler travel. This increases the travel but reduces the out put force (torque is torque)

I mounted my roll servo under my seat on a piece of aluminum angle with a torque brace. I promise you these things are very rigidly mounted. Besides the servos can only put out 32in-lb of torque. With the lever arms I’m using they can only put out about 24 lb on roll and 18 lb on pitch. Not much should be plenty for roll and likely enough for pitch for what I’m doing. I might be a little tight on torque for pitch but flight test will tell. When installing the servos the travel is important not to exceed +/- 60 deg so you don’t have over center condition locking your controls. I also installed travel stops to make sure this cant happen.

Also during this install I had to make push pull rods, I made these out of 6061-T6 3/8” aluminum tube with MS spec balled bearings. The servos had a minor amount of drag to the systems but from what Im told and have experienced at work you don’t notice this in fight. 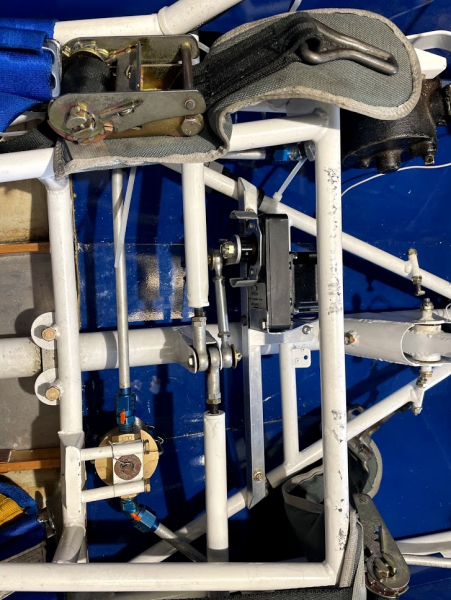 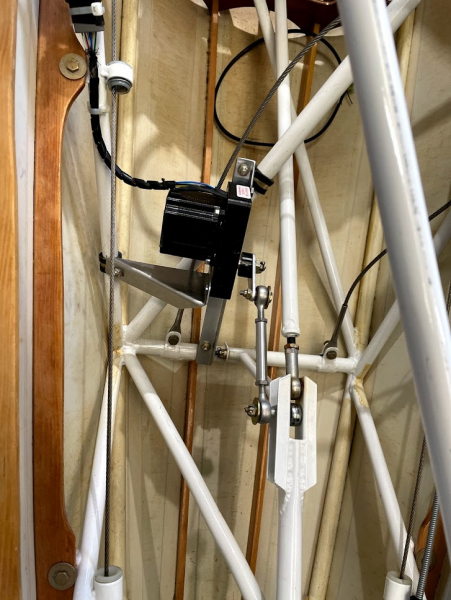 I currently have a Raven inverted oil pickup plate over the normal vacuum pump port (the AND20000 pump pad had been removed). I bought a SD-8 and VAC2 adapter from B&C. I mounted the regulator to my firewall for cooling and the capacitor, relay, and crow bar are back by the battery behind my seat. I had to remove my oil filter but not the 90 deg adapter to gain access to the lower left pad stud. I also already had the drive gear which didn’t come with the SD-8 but nearly everything else did. A very complete kit with gaskets and all. I just followed the instructions. 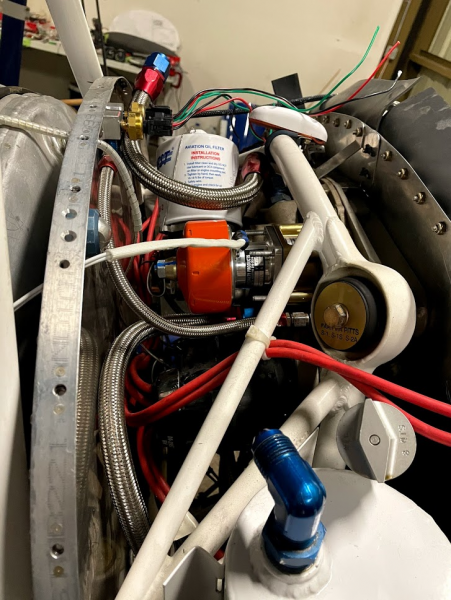 I built several harness and protected the wires from chaffing by using expandable sleeving. Before I did all the wiring I build wiring diagrams for everything. I have two sets of Circuit breakers on custom carbon pieces.

I mounted the EMS using WDG clamps on the foward left side near the left rudder pedal (this is an older photo before I completed the EGT and CHT wiring). The system is wired for RPM, CHT, EGT, Fuel Flow, Manifold Pressure, Fuel Pressure, Oil Pressure, Oil Temperature, Battery fault Status, System Voltage, and Alternator Status. 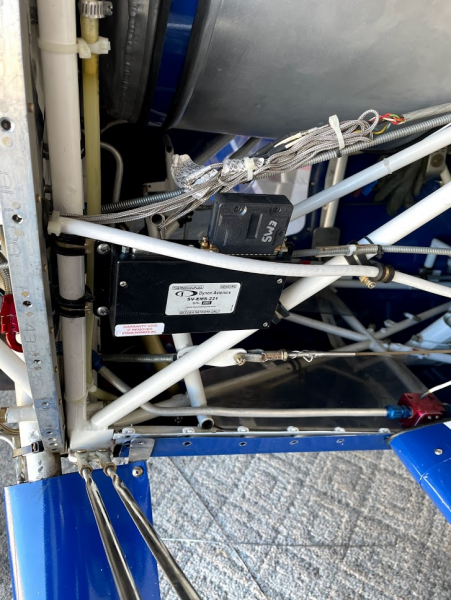 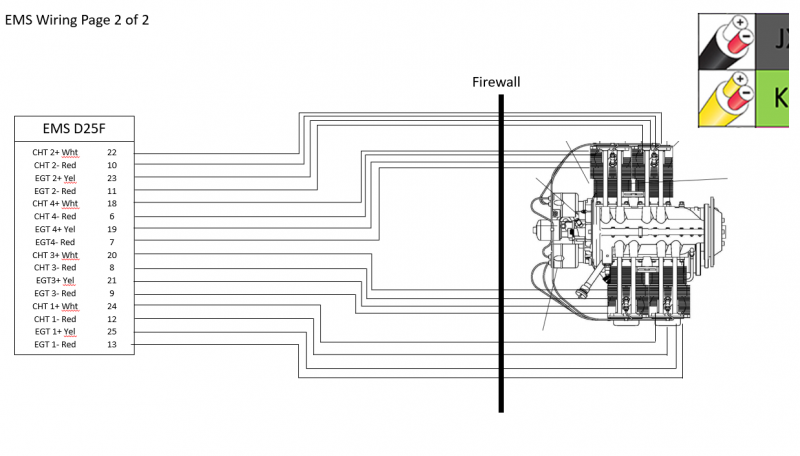 The Dynon doesn’t have much wiring but I added Serial wiring for the Trig TY91 radio to display Primary and Standby frequencies and also allows pushing of frequencies from the Dynon to the Trig. I also wired the Audio to the radio for cautions and warnings from the Dynon. Later if I want I can install the ADS-B in system which will give traffic advisories but I have this on my iPad already so I opted not even though left the wiring stowed if I chose to do that later. 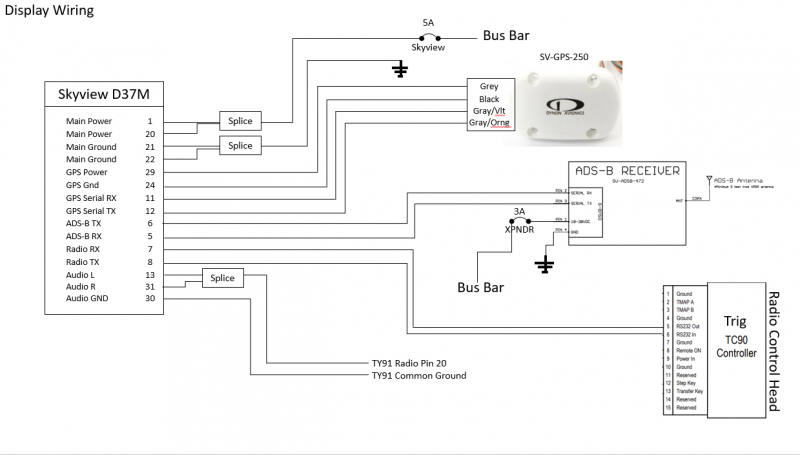 This was kina of pain but I was able to fabricate an aluminum bracket to mount the ADAHRS at level attitude of the aircraft (parallel to the longerons). The OAT sensor is currently mounted to a bracket attached to the old aft landing gear mounting bracket. I’m not sure if this is affected by the exhaust or engine heat but I will do a survey later to see. 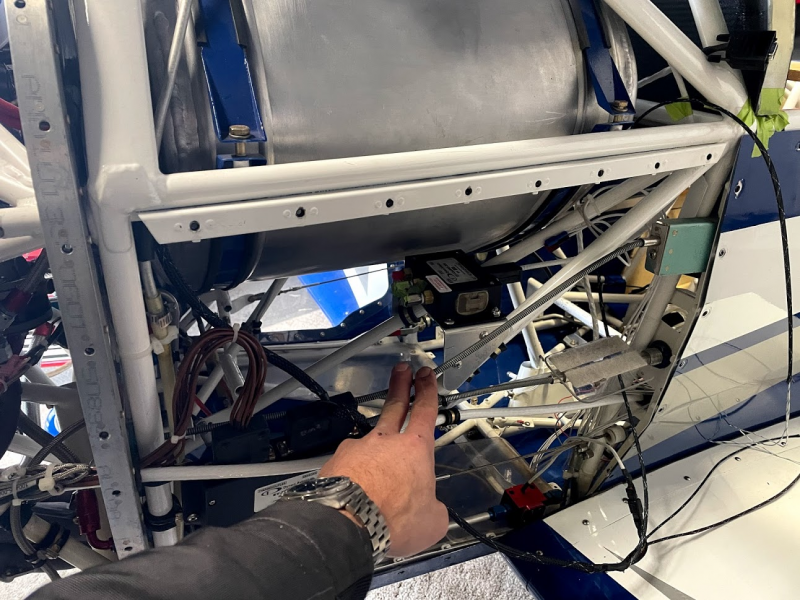